Kids Encyclopedia Facts
This page is about Sawtooth Mountain. For the volcanic field, see Indian Heaven.

Sawtooth Mountain is the third highest peak the Indian Heaven Wilderness in Washington. On clear days hikers can see views of four nearby volcanoes: Mount Adams, Mount Hood, Mount St. Helens, and Mount Rainier from the Sawtooth Mountain Trail, which skirts the subalpine upper west side of Sawtooth Mountain. The shield volcano is noted as a series of eroded, volcanic spires. While the mountain is free of snow and ice, snow tends to linger on the summit well into July.

Sawtooth Mountain is one of the many shield volcanoes topped by cinder cones and spatter cones that make up the Indian Heaven Volcanic Field. About 60 eruptive centers lie on the 19-mile (30 km) long, N10°E-trending, Indian Heaven fissure zone. The 230 square miles (600 km2) field has a volume of about 20 cubic miles (100 km3) and forms the western part of a 770-square-mile (2,000 km2) Quaternary basalt field in the southern Washington Cascades, including the King Mountain fissure zone along which Mount Adams was built. 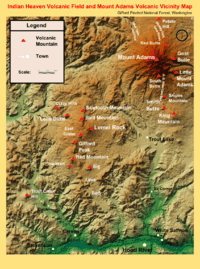 The Sawtooth Berry Fields is located north of Sawtooth Mountain, around Surprise Lakes and the Sawtooth Trailhead for the Pacific Crest Trail.

All content from Kiddle encyclopedia articles (including the article images and facts) can be freely used under Attribution-ShareAlike license, unless stated otherwise. Cite this article:
Sawtooth Mountain Facts for Kids. Kiddle Encyclopedia.