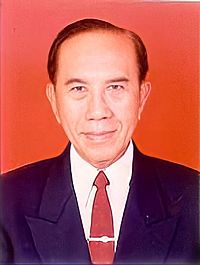 Sayidiman Suryohadiprojo (21 September 1927 — 16 January 2021) was an Indonesian Javanese Army lieutenant general and politician. He was an Ambassador to Japan from 1979 until 1983 and Ambassador-at-large to Africa from 1992 until 1995. Suryohadiprojo was born in Bojonegoro Regency, East Java.

Suryohadiprojo died on 16 January 2021 at a Jakarta hospital, aged 93.

All content from Kiddle encyclopedia articles (including the article images and facts) can be freely used under Attribution-ShareAlike license, unless stated otherwise. Cite this article:
Sayidiman Suryohadiprojo Facts for Kids. Kiddle Encyclopedia.