Scalpay ( Scottish Gaelic: Sgalpaigh or Sgalpaigh na Hearadh; i.e. "Scalpay of Harris" to distinguish it from Scalpay off Skye) is an island in the Outer Hebrides of Scotland. 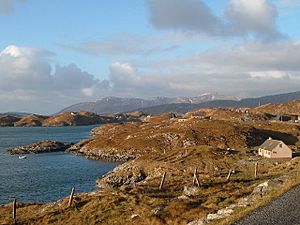 Scalpay is around 4 kilometres (2.5 miles) long and rises to a height of 104 metres (341 feet) at Beinn Scorabhaig. The area of Scalpay is 653 hectares (2.52 sq mi). The main settlement on the island is at the north, near the bridge, clustered around An Acairseid a Tuath (North Harbour).

The island is peppered with small lochans. The largest of these is Loch an Duin (Loch of the Fort) which has a tiny island in it, with the remains of the fort still visible. Eilean Glas, a tiny peninsula on Scalpay's eastern shore, is home to the first lighthouse to be built in the Outer Hebrides.

Scalpay's nearest neighbour, Harris, is just 300 metres (980 feet) away across the narrows of Caolas Scalpaigh. In 1997, a bridge from Harris to Scalpay was built, replacing a ferry service.

Mac an Tàilleir (2003) suggests the name derives from "ship island" from the Norse. However, Haswell-Smith states that the Old Norse name was Skalprøy, meaning "scallop island".

The vast majority of the locals in Scalpay are Protestants. The island is home to two Presbyterian churches, the Free Church of Scotland and the Free Church of Scotland (Continuing). Like most places in the Outer Hebrides, Sunday is a day that locals use to rest from work and attend church. Respect for the Sabbath is appreciated by the islanders and they warmly welcome all visitors to meet with them during the services.

In 2001, the island had 322 people, whose main employment was fish farming and prawn fishing. By 2011 the population had declined by 9% to 291 whilst during the same period Scottish island populations as a whole grew by 4% to 103,702.

All content from Kiddle encyclopedia articles (including the article images and facts) can be freely used under Attribution-ShareAlike license, unless stated otherwise. Cite this article:
Scalpay, Outer Hebrides Facts for Kids. Kiddle Encyclopedia.