Scalpay ( Scottish Gaelic: Sgalpaigh) is an inhabited island in the Inner Hebrides of Scotland which has a population of 4.

Scalpay is privately owned and operates a red deer farm, shooting estate and holiday cottages. Much of Scalpay is covered with heather, while other areas are conifer forestry plantations.

Mac an Tàilleir (2003) suggests the name derives from "ship island" from the Norse. However, Haswell-Smith states that the Old Norse name was Skalprøy, meaning "scallop island". 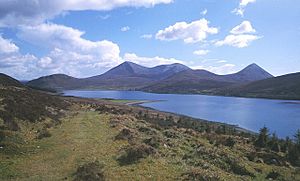 Looking south to Skye from Scalpay.

Dean Monro gave the following description of Scalpay in 1549:

...a fair hunting forest, full of deer, with certain little woods and small towns, well inhabited and manured, with many strong coves, good for fishing, in heritage it pertains to Maclean of Duart.

By the time of Dr Johnson's tour, the island was held by a tenant of Sir Alexander Macdonald.

Shipping magnate and politician, Donald Currie owned the island in the late 19th century and was responsible for the construction of the first roads and much tree planting.

All content from Kiddle encyclopedia articles (including the article images and facts) can be freely used under Attribution-ShareAlike license, unless stated otherwise. Cite this article:
Scalpay, Inner Hebrides Facts for Kids. Kiddle Encyclopedia.