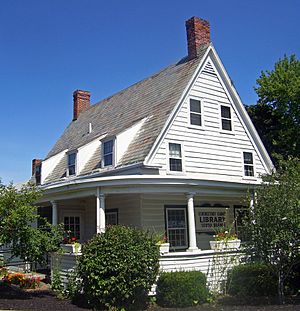 Scotia is a village in Schenectady County, New York, United States, incorporated in 1904. The population was 7,729 at the 2010 census. Scotia is part of the town of Glenville, and is connected with the city of Schenectady by the Western Gateway Bridge over the Mohawk River.

The land was purchased by Alexander Lindsay Glen, a native of Scotland, from the Mohawk people in the 17th century. Glen named his estate Scotia (Latin for "Scotland") after his home country. Scotia was the location of a military encampment during both the French and Indian War of 1754 and again during the War of 1812. During the 1800s, Scotia was known for its production of brooms, over 1 million annually for a time. In the 20th century, Scotia became a thriving bedroom community for employees of Schenectady employers such as General Electric. During World War II the Scotia Naval Supply Depot (1942-1971) employed over 2000 workers.

Scotia is served by the Scotia-Glenville Central School District. Schools located in the village of Scotia include Lincoln and Sacandaga Elementary Schools, while Scotia-Glenville High School and Scotia-Glenville Middle School stand just outside the village limits. The private Mekeel Christian Academy occupies the former Scotia High School building in the village. Local residents may enjoy pastimes at all seasons in Collins Park and nearby Freedom Park. Winter events include sledding and ice skating, while summer activities include baseball, tennis, swimming, pond and river fishing, picnicking, concerts, and waterskiing on the Mohawk River.

Scotia is served by the historic New York Route 5, and is the terminus for both Route 50 and Route 147 providing access to Saratoga County. The Route 5 link to Schenectady is over the Western Gateway Bridge, originally built in 1923-25, and replaced in 1971. Scotia was formerly served by railways, including the New York Central (which operated a switch yard in the village), the Delaware and Hudson, and the Boston and Maine, as well as the electric Fonda, Johnstown and Gloversville interurban line. Two nearby airports, located in the town of Glenville, serve the village: Mohawk Valley Airport is a privately owned airport for public use located three nautical miles (6 km) along State Route 5, northwest of the village of Scotia. Schenectady County Airport is a joint civil-military public airport located two nautical miles (3 km) north-northeast of the village of Scotia.

All content from Kiddle encyclopedia articles (including the article images and facts) can be freely used under Attribution-ShareAlike license, unless stated otherwise. Cite this article:
Scotia, New York Facts for Kids. Kiddle Encyclopedia.