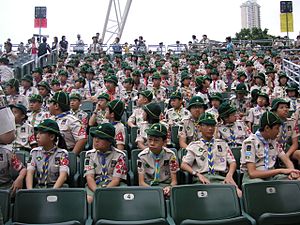 Scouting (sometimes called the Scout Movement) is a youth movement. It was started in 1907 by Robert Baden-Powell as a movement for boys.

Baden-Powell took many ideas from the experiences he made with the Mafeking Cadet Corps. This corps was a paramilitary group made of boys. It was formed during a siege in the Second Boer War. The boys mainly carried messages. This was so the soldiers could focus on defending the city.

Originally, the Scout movement was for boys only. A similar movement for girls, called "Girl Guides" was started in 1910. In most countries there are associations for Scouts and for Girl Guides. Today the Scouts often accept girls, too.

In the Scout movement, people learn to work together to achieve a goal. They also train their character to become better adults.

Usually Scouts give a promise to live by certain rules, and to help others when they can.

How many Scouts there are 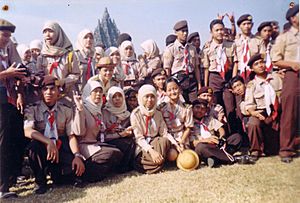 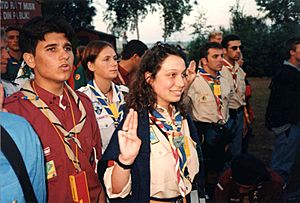 In 2005, there were more than 28 million Boy Scouts and over 10 million Girl Guides. They came from 216 different countries. There were only six countries with no Scout movement in 2006. They were Andorra, People's Republic of China, Cuba, Laos, Myanmar and North Korea.

In Cuba, there was a Scout organisation, but the Communist government replaced it by the José Martí Pioneer Organization, which is similar to Scouts, but without the international brotherhood and the peace mission.

Scouting organisations have been banned in People's Republic of China. They have been replaced by Young Pioneers of China and Communist Youth League of China. These organisations are a bit similar to Scouts, but without the international brotherhood and the peace mission. There is a Scout Association in Hong Kong and one in Macau. Hong Kong and Macau are Special Autonomous Regions of the People's Republic of China, so the Scout associations there are still allowed to exist. In the Republic of China (Taiwan) Scouting was never banned.

There are no Scouting organisations in Myanmar, but there are a few Boy Scouts and Girl Scouts (headed by the US Scout movement) in Yangon. 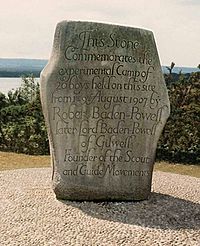 This stone on Brownsea Island commemorates the first Scout camp. 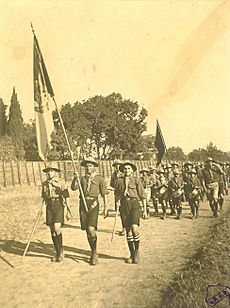 First procession of Armenian Scouts in Constantinople in 1918

Baden-Powell was a military officer. He was stationed in India and Africa in the 1880s and 1890s. Since his youth, he was fond of woodcraft and military scouting. He therefore showed his men how to survive in the wilderness. He noticed that if he taught the soldiers to develop independence, they would no longer follow the orders given by their officers blindly.

In 1896, during the Second Matabele War, Baden-Powell first met and became friends with the American-born British Army Chief of Scouts Frederick Russell Burnham. From Burnham he learned the ways of cowboy and Indian scouts of the Western United States, he started to wear a scout hat like the one worn by Burnham, and he discussed with Burnham a scout training program for boys. Three years later during the Second Boer War, Baden-Powell was besieged in the small town of Mafeking by a much larger Boer army (the Siege of Mafeking). The Mafeking Cadet Corps was a group of youths that supported the troops. The cadets carried messages. This freed the men for military duties. It also kept the boys occupied during the long siege. The Cadet Corps performed well, helping in the defence of the town (1899–1900). This experience was one of the many factors that inspired Baden-Powell to form the Scouting movement. Each member received a badge that showed a combined compass point and spearhead. The badge's logo was similar to the fleur-de-lis that Scouting later adopted as its international symbol.

In the United Kingdom the public followed his struggle to hold Mafeking through newspapers. After the siege, Baden-Powell had become a national hero. This pushed the sales of a small instruction book he had written about military scouting, Aids to Scouting.

On his return to England he noticed the large interest of boys in this book, which was also used by teachers and youth organizations. Several people suggested to him to rewrite this book for boys, especially during an inspection of the Boys' Brigade. This brigade was a large youth movement, drilled with military precision. Baden-Powell thought this would not be attractive and suggested that it could grow much larger when scouting would be used. He studied other schemes, parts of which he used for Scouting. 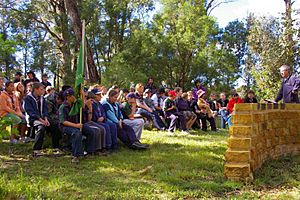 (When these laws were made in 1907, there were no Girl Scouts; of course the laws apply to Girl Scouts all the same)

In his original book on boy scouting, General Baden-Powell introduced the Scout promise, as follows:

(This was later adapted to different countries, and organisations) 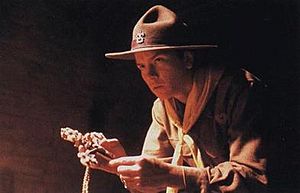 Since the Scouts were formed, other people have tried to form scout-like movements. These movements are a bit like the Scouts, but they put more weight on different things. There are for example Scout-like movements that focus more on the fact that the young people should get a good education in religious matters. The movements that have been formed in countries such as Cuba or China are much like Scouts; they leave out some elements though, that the national governments thought would harm the country.

All content from Kiddle encyclopedia articles (including the article images and facts) can be freely used under Attribution-ShareAlike license, unless stated otherwise. Cite this article:
Scouting Facts for Kids. Kiddle Encyclopedia.