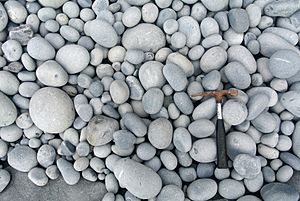 Cobbles on a beach 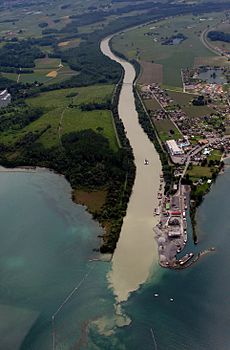 Sediment is the matter which falls to the bottom of oceans and lakes. Compressed and gradually transformed, sediment is the basis of sedimentary rocks. The term is also used for material transported by wind or water, and deposited on the surface. In due course, this may also turn into rock. The study of how sedimentary rocks are formed is called sedimentology.

In more general use, sediment is any matter which falls to the bottom of a liquid, such as beer. 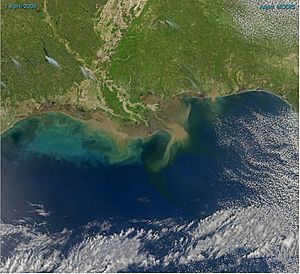 Sediment in the Gulf of Mexico 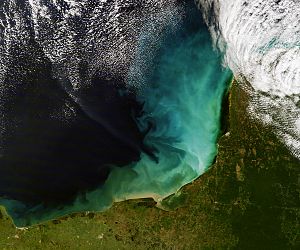 Sediment off the Yucatán Peninsula

Sediment can be classified based on its grain size or composition.

Sediment size is measured on a log base 2 scale, called the "Phi" scale, which classifies particles by size from "colloid" to "boulder".

Composition of sediment can be measured in terms of:

This leads to an ambiguity in which clay can be used as both a size-range and a composition (see clay minerals).

All content from Kiddle encyclopedia articles (including the article images and facts) can be freely used under Attribution-ShareAlike license, unless stated otherwise. Cite this article:
Sediment Facts for Kids. Kiddle Encyclopedia.