Selkirk is a city in the western Canadian province of Manitoba, located on the Red River about 22 kilometres (14 mi) northeast of the provincial capital Winnipeg. It has a population of 10,278 as of the 2016 census.

The mainstays of the local economy are tourism, a steel mill, and a major psychiatric hospital. A vertical lift bridge over the Red River connects Selkirk with the smaller town of East Selkirk. The city is connected to Winnipeg via Highway 9 and is served by the Canadian Pacific Railway.

The city was named in honour of Scotsman Thomas Douglas, 5th Earl of Selkirk, who obtained the grant to establish a colony in the Red River area in 1813. 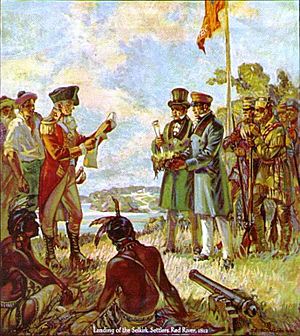 The present-day city is near the centre of the 160,000-square-mile (410,000 km2) area purchased by the Earl of Selkirk from the Hudson's Bay Company.The first settlers of the Red River Colony arrived in 1813. Although the settlers negotiated a treaty with the Saulteaux Indians of the area, the commercial rivalry between the Hudson's Bay Company and the North West Company gave rise to violent confrontations between the settlers and the trading companies. In recognition of the Earl's importance in bringing settlers to the region, the town was named Selkirk and incorporated in 1882.

The Keenora in the Manitoba Marine Museum.

The Selkirk Mental Health Centre, the largest mental health facility in the province, is a major employer in the city. The Centre's surroundings are a park-like campus on the outskirts of the city.

Gerdau, owned by Gerdau S.A. of Porto Alegre, Brazil, operates a steel minimill in Selkirk. This steel mill (known locally as MRM or "The Manitoba Rolling Mills") is also a major employer. 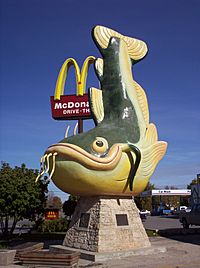 Selkirk is advertised as the Catfish Capital of the World, due to the large amounts of catfish in the nearby Red River. This nickname was part of an advertising campaign to entice American anglers, who travel to Manitoba to fish for trophy-sized catfish. Selkirk is also home to Chuck the Channel Cat, a fiberglass representation of a catfish that measures 25 feet (7.6 m) long. The name Chuck was chosen to honour local sport fisherman Chuck Norquay, who drowned while doing what he loved best — fishing in the Red River. After Chuck was built in 1986, the town council decided to place Chuck in front of Smitty's Restaurant on Main Street.

The Marine Museum of Manitoba, a collection of historical marine artifacts of Lake Winnipeg and the Red River area, is located in Selkirk. Selkirk is also the site of a Canadian Coast Guard base.

The Selkirk Fair and Rodeo is held annually to celebrate the area's agricultural history. It celebrated its 130th anniversary in 2008.

Selkirk has hosted major events in conjunction with the city of Winnipeg, such as select games of the 2007 Women's World Ice Hockey Championships. In 2009, Selkirk was host to the Telus Cup, Canada's national midget hockey championship, with the Winnipeg Thrashers as the host team. The Notre Dame Hounds defeated the Calgary Buffaloes 4–0 in the gold medal game, which was broadcast live from Selkirk on TSN. 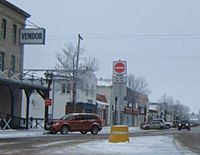 Selkirk is located in the Interlake Region of Manitoba, about 22 km northeast of the provincial capital Winnipeg on the Red River. A vertical lift bridge over the Red River connects Selkirk with the smaller town of East Selkirk. The city mostly borders the Rural Municipality of St. Andrews, except to the east, where it borders the Rural Municipality of St. Clements across the Red River. The terrain is extremely flat with fields of wheat and canola surrounding the city.

Due to Selkirk's position on the edge of the Canadian Prairies, there is a moderate 510.4 mm (20.1 inches) of precipitation annually. Selkirk has a climate with four very distinct seasons. A general year will include warm (sometimes hot) summers, cold winters, and a comfortable spring and autumn.

All content from Kiddle encyclopedia articles (including the article images and facts) can be freely used under Attribution-ShareAlike license, unless stated otherwise. Cite this article:
Selkirk, Manitoba Facts for Kids. Kiddle Encyclopedia.