The Sepulveda Dam is a project of the U.S. Army Corps of Engineers designed to withhold winter flood waters along the Los Angeles River. Completed in 1941, at a cost of $6,650,561 (equivalent to $96,245,000 in 2018), it is located south of center in the San Fernando Valley, approximately eight miles east of the river's source in the western end of the Valley, in Los Angeles, California.

Sepulveda Dam, along with Hansen Dam located in the north San Fernando Valley, was constructed in response to the historic 1938 floods which killed 144 people. Sepulveda Dam was placed at what was at the time, the current edge of the city. East of the dam the river was crowded into a narrow bottom by the city's growth. One legacy of Sepulveda Dam is its flood control basin, a large and undeveloped area in the center of the Valley, used mostly for wildlife refuge and recreation. But another legacy of the 1938 Los Angeles River flood was the post-World War II channelization of all the Valley's dry washes, which along with the post-World War II rapid suburbanization left the Valley with hot, dry, concrete-lined river bottoms instead of greenbelts. Although now, in part, these are being devolved as interconnecting bike paths.

Behind the dam, the Sepulveda Basin is home to several large recreation areas including Woodley Park, a model aircraft field, The Japanese Garden, a wildlife refuge, a water reclamation plant, and an armory. The Basin is kept free of urban over-building so that water can build up there during a prospective hundred-year flood.

It is an often-used location for films (such as Escape from New York), music videos (such as BTS' Kinetic Manifesto), and car commercials. 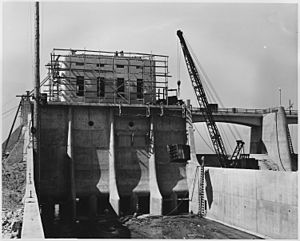 When the 1914 flood caused $10 million in damages to the developing basin areas, a public outcry began for action to address the recurring flooding problems. During the following year, the Los Angeles County Flood Control District was formed. Some of the early flood control efforts included smaller areas of channelization and the planning for needed reservoirs. Taxpayers approved bond issues in 1917 and 1924 to build the first major dams. However, they were not willing to provide enough funding for the much needed and substantial infrastructure downstream of these dams. After two more destructive floods in the 1930s, most notably the 1938 flood, federal assistance was requested. The Army Corps of Engineers took a lead role in channelizing the river and constructing several dams which would create flood control basins behind them. Channelization began in 1938, and by 1960, the project was completed to form the present fifty-one mile engineered waterway. Included in this work were Hansen Dam, completed in 1940 and followed by Sepulveda Dam in 1941. In 1973, Burbank Blvd was built through the Sepulveda Basin, Woodley Ave was also built in the recreation area in 1975. 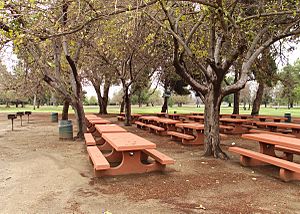 During the 2028 Summer Olympics, the area around the dam will host Canoe Slalom, Equestrian and Shooting.

The 2,000-acre Sepulveda Basin Recreation Area is a flood control basin managed by the Los Angeles City Department of Recreation and Parks.

Woodley Park is a large city park located on Woodley Avenue between Victory and Burbank Boulevards. The Leo Magnus Cricket Complex, a dog park, and group picnic areas are within the park. The park was opened in 1975.

The Japanese Garden is a 6.5 acres (2.6 ha) public Japanese garden located on the grounds of the Tillman Water Reclamation Plant adjacent to Woodley Park. 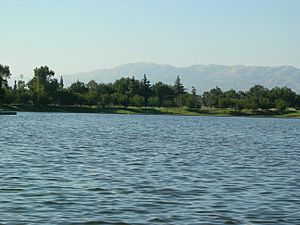 The Sepulveda Basin Wildlife Reserve is at the southeast end of the Sepulveda Flood Control Basin and Recreation Area. It has two sections, the North Reserve and South Reserve, located north and south of Burbank Boulevard. Both have nature paths and hiking trails. Access and parking are in eastern Woodley Park near to the Tillman Water Reclamation Plant, or from Burbank Boulevard east of Woodley Avenue.

The Sepulveda Dam Recreation Area Bike Path is a 9 miles (14 km) bicycle path route looping around the recreation area. It runs from Victory Boulevard near Interstate 405, westward to White Oak Avenue, south on White Oak to Burbank Boulevard, east on Burbank to Woodley Boulevard, and north on Woodley returning to Victory Boulevard. Public access is continuous along it.

A shorter route heads south on Balboa Boulevard, which crosses a natural stretch of the Los Angeles River that lined with native Arroyo willows, California sycamores, and other California native plants.

The loop sections along Victory and Burbank can be frequented by joggers. The bike path can seasonally have burr-bearing weeds, which may cause flats in less durable tires.

There is ample free parking available in the public park, sports field, &/or golf course lots on Burbank, Woodley and Balboa Boulevards.

The Sepulveda Basin River Recreation Zone extends from above Balboa Blvd to the confluence of Haskell Creek below Burbank Blvd. It is open for recreational non-motorized boating during the summer, with restricted access to some protected wildlife areas along the banks.

Other recreation facilities within the Sepulveda Dam Recreation Area include:

All content from Kiddle encyclopedia articles (including the article images and facts) can be freely used under Attribution-ShareAlike license, unless stated otherwise. Cite this article:
Sepulveda Dam Facts for Kids. Kiddle Encyclopedia.