The Shark Reef Aquarium at Mandalay Bay is a public aquarium located at and owned by the Mandalay Bay Resort and Casino in Las Vegas, Nevada. Its main tank is 1,300,000 US gallons (4,900,000 l), one of the largest in North America. The facility is 95,000 sq ft (8,800 m2), and displays numerous species of sharks, rays, fish, reptiles, and marine invertebrates. It also features a shark tunnel. The reef was developed in consultation with the Vancouver Aquarium. 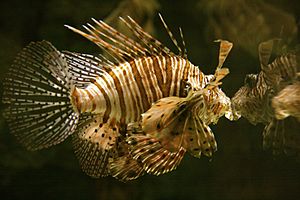 A fish at the aquarium.

Shark Reef was built at a cost of $40 million, and was opened on June 20, 2000. In 2007, it underwent a re-branding campaign adding "Aquarium" to the official name. Shark Reef Aquarium officials stated that the re-branding is intended to present the actual nature of the habitat, as members of the public sometimes confused Shark Reef as a name for a bar, lounge, restaurant, etc.

In 2012, Shark Reef Aquarium replaced the signage and audio-wands of each exhibit with various interactive touch screens throughout the facility.

Members of the Shark Reef staff participate in the "Adopt-a-Cove" program to aid in the clean up of Lake Mead. Within the map and guide handed out at the park, they offer an "In Good Taste" guide that folds up into a business card size pamphlet to promote sustainable seafood choices. The information found within this guide is credited to the Monterey Bay Aquarium Foundation. Throughout the various exhibits, there is signage to educate the audience about the dangers of shark finning, introducing invasive species (like lion fish), and various other harmful practices.

In May 2005, two adult male Devil's Hole pupfish were moved from Devils Hole and two adult females were moved from a refuge at Hoover Dam to the Shark Reef at Mandalay Bay in hopes of augmenting the population. As of July, 2020, these fish can be found in a small exhibit in the first section of the aquarium. Additionally, over 200 of the fish are in a breeding program in the sister site.

The jungle is where you can find various reptiles and terrestrial animals such as golden crocodiles and the Komodo dragon.

On June 20, 2008, Shark Reef at Mandalay Bay received a Komodo dragon from the Miami Zoo. He is currently at the Jungle Temple exhibit at the aquarium.

After the 10th anniversary, they added a Burmese python and two green tree monitors in the Jungle Temple.

Within the temple, the Shark Reef offers a touch pool where attendees can have a hands on approach of several marine species. Common species found within the touch pool include horseshoe crabs, and various rays. Every now and then the touch pool becomes a temporary home to baby zebra sharks.

Shark Reef Aquarium was the first closed-system aquarium in North America to exhibit a great hammerhead shark. The female juvenile was less than four feet long when she was accidentally caught off the coast of Florida. The shark was successfully flown into Mandalay Bay in August 2001 on a record 16-hour flight in a special transportation tank designed specifically for it. It remained in a private quarantine tank for 2.5 years until the in-house aquarium husbandry team decided it had grown large enough where it would not fall prey to the other sharks in the exhibit tank. It measured six feet long when it was finally introduced among big public fanfare into the 1,300,000 US gal (4,900,000 l) tank on November 3, 2003 for public exhibition. After more than a year on exhibit, the specimen died suddenly and unexpectedly on December 16, 2004. A necropsy later attributed an intestinal infection as the cause of death. The specimen had grown to 6.5 ft (2.0 m) and weighed in at 95 lb (43 kg) at time of death.

On Shark Reef's 10th anniversary, they placed a bowmouth guitarfish on exhibit, the new resident.

All content from Kiddle encyclopedia articles (including the article images and facts) can be freely used under Attribution-ShareAlike license, unless stated otherwise. Cite this article:
Shark Reef at Mandalay Bay Facts for Kids. Kiddle Encyclopedia.