Shelbyville was founded in 1827 and named in honor of Isaac Shelby, hero of the Revolutionary War and Governor of Kentucky. The history of Shelbyville begins with Barnett Bone, a Tennessean who, in 1835, built a log cabin along the Kaskaskia River. His cabin eventually became the county courthouse. The first businesses were blacksmith shops, a general store and stage coach stop, and a grist mill.

The terminal moraine of the Wisconsin Glacier is located near Shelbyville. This is referred to as the Shelbyville Moraine. 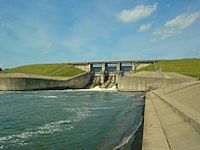 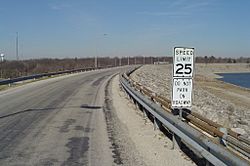 The Kaskaskia River has been dammed where it breaches the Shelbyville Moraine, forming Lake Shelbyville.

The Army Corps of Engineers broke ground on the dam in 1963, and construction was completed in the early summer of 1970. Tours of the dam are given at 3 P.M. Saturdays and Sundays.

Another Shelbyville invention, the first commercial pick-up bailer, was designed and developed by Raymore McDonald, as conceived and financed by Horace M. Tallman and his two sons, Leslie and Gentry. These balers were marketed for many years by the Ann Arbor Machine Company of Shelbyville. This concept of field processing of farm forages made a significant contribution to the efficiency and economy of harvesting in the world's agriculture. This basic field pick-up mechanism has been used in over 15 million balers. The American Society of Agricultural and Biological Engineers designated Shelbyville as an historical landmark of agricultural engineering, of which there are only 47 in the entire United States. Mr. Tallman's home has been restored and is on the National Register of Historic Places. Located on West Main Street, the Tallman home is currently part of the Shelby Inn.

Shelbyville is home to Shelbyville Community Unit School District 4 which also includes Shelbyville High School and was once home to Sparks College, a business trade school, founded in 1908 that closed in 2009. 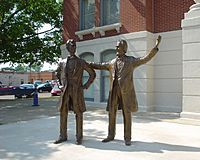 A statue of Abraham Lincoln in front of the Shelbyville Courthouse

All content from Kiddle encyclopedia articles (including the article images and facts) can be freely used under Attribution-ShareAlike license, unless stated otherwise. Cite this article:
Shelbyville, Illinois Facts for Kids. Kiddle Encyclopedia.