Shingō is in south-central Aomori Prefecture. It is east of Lake Towada. A lot of the village is mountainous. The elevation can be 1000 meters high near the border with Akita Prefecture. The village has a cold Humid continental climate characterized by cool short summers and long cold winters with very heavy snowfall (Köppen climate classification Dfa). The average annual temperature in Shingō is 8.7 °C (47 °F). The average yearly amount of rain is 1342 mm (53 in.). September is the wettest month. The hottest month is August; the average temperature is 22.2 °C (72 °F). The coldest month is January; the average temperature is -3.7 °C (25 °F).

Per Japanese census data, the population of Shingō has declined over the past 40 years.

The area around Shingō was controlled by the Nambu clan of Morioka Domain during the Edo period. During the post-Meiji restoration cadastral reform of April 1, 1889, Herai Village and neighboring Nozawa Village were formed. On July 29, 1955 the western portion of Nozawa Village merged into Herai, which was then renamed Shingō.

Shingō has two public elementary schools and two public middle schools operated by the village government. The village does not have a high school.

The economy of Shingō is mostly agriculture. Notable crops include edible chrysanthemum, Japanese yam and tobacco. Traditionally a horse breeding area, Shingō is also known for its cattle ranches. 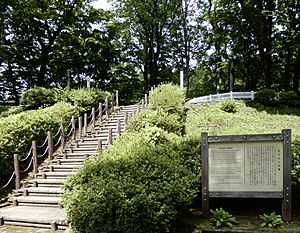 Shingō village has what is said to be the last resting place of Jesus. It is called the "Tomb of Jesus" (Kirisuto no haka). It's also where Jesus' last descendants, the family of Sajiro Sawaguchi, lives. The Sawaguchi family says that Jesus Christ did not die on the cross at Golgotha. Instead, his brother, Isukiri, took his place on the cross. Jesus left, and he went through Siberia to Mutsu Province (in northern Japan). Once in Japan, he changed his name to Torai Tora Daitenku. He became a rice farmer, and he married a twenty-year old Japanese woman named Miyuko. He raised three daughters near what is now Shingō. While in Japan, he supposedly traveled around. He supposedly died at the age of 106. His body was exposed on a hilltop for four years. Jesus' bones were collected, bundled, and buried in the mound said to be the grave of Jesus Christ.

Another mound near the supposed grave of Jesus is said to have an ear of the brother of Jesus. It is also said to have some hair from Mary, the mother of Jesus. They were the only things from his family that Jesus could carry when he left Judaea. The claims started in 1933 after the people found supposed "ancient Hebrew documents about Jesus' life and death in Japan." They were supposedly the from Jesus. These documents are called the Takeuchi Documents. They are said to be very old documents that were passed down through the family of Takeuchi Kiyomaro. The documents were supposedly taken by the Japanese authorities, and the documents were taken to Tokyo, shortly before World War II. They have not been seen since.

All content from Kiddle encyclopedia articles (including the article images and facts) can be freely used under Attribution-ShareAlike license, unless stated otherwise. Cite this article:
Shingō, Aomori Facts for Kids. Kiddle Encyclopedia.