Shoshenq I facts for kids

Hedjkheperre Setepenre Shoshenq I (Egyptian ššnq,:, reigned c. 943–922 BC)—also known as Shashank or Sheshonk or Sheshonq I—was a pharaoh of ancient Egypt and the founder of the Twenty-second Dynasty of Egypt. Of Meshwesh ancestry, Shoshenq I was the son of Nimlot A, Great Chief of the Ma, and his wife Tentshepeh A, a daughter of a Great Chief of the Ma herself. He is presumed to be the Shishak mentioned in the Hebrew Bible, and his exploits are carved on the Bubastite Portal at Karnak. 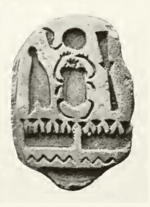 Picture of a scarab of Hedjkheperre Shoshenq I by Flinders Petrie. 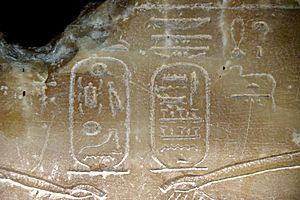 Birth and throne names of Shoshenq I

The conventional dates for his reign as established by Kenneth Kitchen are 945–924 BC but his time-line has recently been revised upwards by a few years to 943–922 BC, since he may well have lived for up to two to three years after his successful campaign in Canaan, conventionally dated to 925 BC. As Edward Wente of the University of Chicago noted on page 276 of his JNES 35(1976) Book Review of Kitchen's study of the Third Intermediate Period, there is "no certainty" that Shoshenq's 925 BC campaign terminated just prior to this king's death a year later in 924 BC. The English Egyptologist, Morris Bierbrier also dated Shoshenq I's accession "between 945–940 BC" in his seminal 1975 book concerning the genealogies of Egyptian officials who served during the late New Kingdom and Third Intermediate Period. Bierbrier based his opinion on Biblical evidence collated by W. Albright in a BASOR 130 paper. This development would also account for the mostly unfinished state of decorations of Shoshenq's building projects at the Great Temple of Karnak where only scenes of the king's Palestinian military campaign are fully carved. Building materials would first have had to be extracted and architectural planning performed for his great monumental projects here. Such activities usually took up to a year to complete before work was even begun. This would imply that Shoshenq I likely lived for a period in excess of one year after his 925 BC campaign. On the other hand, if the Karnak inscription was concurrent with Shoshenq's campaign into Canaan, the fact that it was left unfinished would suggest this campaign occurred in the last year of Shoshenq's reign. This possibility would also permit his 945 BC accession date to be slightly lowered to 943 BC.

A 2005 study by Rolf Krauss of Ancient Egyptian chronology suggests that Shoshenq I came to power in 943 BC rather than 945 BC as is conventionally assumed based on epigraphic evidence from the Great Dakhla stela, which dates to Year 5 of his reign. Krauss and David Warburton write in the 2006 book Ancient Egyptian Chronology:

The chronology of early Dyn. 22 depends on dead reckoning. The sum of the highest attested regnal dates for Osorkon II, Takelot I, Osorkon I, and Shoshenq I, added to 841 BC as year 1 of Shoshenq III, yields 938 BC at the latest for year 1 of Shoshenq I...[However] The large Dakhla stela provides a lunar date in the form of a wrš feast in year 5 of Shoshenq [I], yielding 943 BC as his year 1.

The Year 5 wrš feast is recorded to have been celebrated at Dakhla oasis on IV Peret day 25 and Krauss' exploration of the astronomical data leads him to conclude that the only 'fit' within the period of 950 to 930 BC places the accession of Shoshenq I between December 944 and November 943 BC—or 943 BC for the most part. However, Dr. Anthony Leahy has suggested that "the identification of the wrš-festival of Seth as [a] lunar [festival] is hypothetical, and [thus] its occurrence on the first day of a lunar month an assumption. Neither has been proven incontrovertibly." Thus far, however, only Dr. Kenneth Kitchen is on record as sharing the same academic view.

A 2010 study by Thomas Schneider argued that Shoshenq reigned from 962 to 941 BCE. Ido Koch in his 2021 book considers Schneider's chronology of Egyptian kings as a valuable integrative study.

Shoshenq I is frequently identified with the Egyptian king Shishak (שׁישׁק Šîšaq, transliterated), referred to in the Hebrew Bible at 1 Kings 11:40, 14:25 and 2 Chronicles 12:2–9. According to these passages, Jeroboam fled from Solomon and stayed with Shishaq until Solomon died, and Shishaq invaded Judah, mostly the area of Benjamin, during the fifth year of the reign of Rehoboam, taking with him most of the treasures of the temple built by Solomon. The egyptologist Kenneth Kitchen claims that Shoshenq's successor, Osorkon I, lavished 383 tons of gold and silver on Egyptian temples during the first four years of his reign and correlate it directly to the looting, while the archaeologist Israel Finkelstein proposes that the looting narrative in question "should probably be seen as a theological construct rather than as historical references".

Shishak/Sousakim was also related to Jeroboam: "the wife of Jeroboam" is a character in the Hebrew Bible. She is unnamed in the Masoretic Text, but according to the Septuagint, she was an Egyptian princess called Ano:

And Sousakim gave to Jeroboam Ano the eldest sister of Thekemina his wife, to him as wife; she was great among the king's daughters... 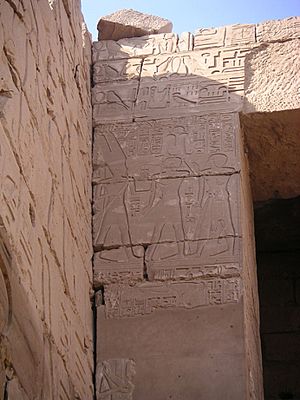 The Bubastite Portal at Karnak, depicting Shoshenq I and his second son, the High Priest Iuput A

Shoshenq I was the son of Nimlot A and Tentsepeh A. His paternal grandparents were the Chief of the Ma Shoshenq A and his wife Mehytenweskhet A. Prior to his reign, Shoshenq I had been the Commander-in-Chief of the Egyptian Army, and chief advisor to his predecessor Psusennes II, as well as the father-in-law of Psusennes' daughter Maatkare. He also held his father's title of Great Chief of the Ma or Meshwesh, which is an Egyptian word for Ancient Libyans. His ancestors had settled in Egypt during the late New Kingdom, probably at Herakleopolis Magna, though Manetho claims Shoshenq himself came from Bubastis, a claim for which no supporting physical evidence has yet been discovered. Significantly, his uncle Osorkon the Elder had already served on the throne for at least six years in the preceding 21st Dynasty; hence, Shoshenq I's rise to power was not wholly unexpected. As king, Shoshenq chose his eldest son, Osorkon I, as his successor and consolidated his authority over Egypt through marriage alliances and appointments. He assigned his second son, Iuput A, the prominent position of High Priest of Amun at Thebes as well as the title of Governor of Upper Egypt and Commander of the Army to consolidate his authority over the Thebaid. Finally, Shoshenq I designated his third son, Nimlot B, as the "Leader of the Army" at Herakleopolis in Middle Egypt. 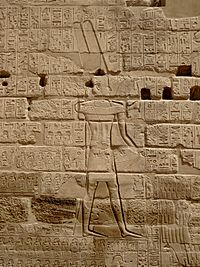 The Triumphal Relief of Shoshenq I near the Bubastite Portal at Karnak, depicting the god Amun-Re receiving a list of cities and villages conquered by the king in his Near Eastern military campaigns.

He pursued an aggressive foreign policy in the adjacent territories of the Middle East, towards the end of his reign. This is attested, in part, by the discovery of a statue base bearing his name from the Lebanese city of Byblos, part of a monumental stela from Megiddo bearing his name, and a list of cities in the region comprising Syria, Philistia, Phoenicia, the Negev, and the Kingdom of Israel, among various topographical lists inscribed on the walls of temples of Amun at al-Hibah and Karnak. The fragment of a stela bearing his cartouche from Megiddo has been interpreted as a monument Shoshenq erected there to commemorate his victory. Some of these conquered cities include ancient Israelite fortresses such as Megiddo, Taanach and Shechem.

There are other problems with Shoshenq being the same as the biblical Shishak: Shoshenq's Karnak list does not include Jerusalem—his biggest prize according to the Bible. His list focuses on places either north or south of Judah, as if he did not raid the center. The fundamental problem facing historians is establishing the aims of the two accounts and linking up the information in them.

There have been some possible suggestions and proposals from scholars regarding this issue. Some argue that the mention of Jerusalem was erased from the list over time. Others believe that Rehoboam's tribute to Shoshenq saved the city from destruction and therefore from the Bubastite Portal's lists. Some scholars even propose that Shoshenq claimed a conquest that he did not enact and copied the list of conquered territories from an old Pharaoh's conquest list.

As an addendum to his foreign policy, Shoshenq I carved a report of campaigns in Nubia and Israel, with a detailed list of conquests in Israel. This is the first military action outside Egypt formally commemorated for several centuries. This report of conquests is the only surviving late Iron Age text concerning Canaan.

Libyan concepts of rule allowed for the parallel existence of leaders who were related by marriage and blood. Shoshenq and his immediate successors used that practice to consolidate their grasp on all of Egypt. Shoshenq terminated the hereditary succession of the high priesthood of Amun. Instead he and his successors appointed men to the position, most often their own sons, a practice that lasted for a century. 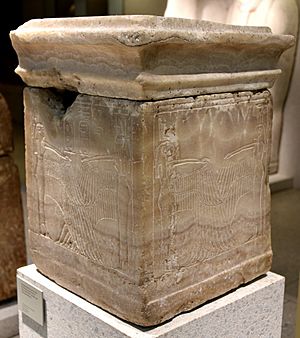 Canopic chest and lid of Shoshenq I at the Neues Museum, Berlin

He was succeeded by his son Osorkon I after a reign of 21 years. According to the British Egyptologist Aidan Dodson, no trace has yet been found of the tomb of Shoshenq I; the sole funerary object linked to Shoshenq I is a canopic chest of unknown provenance that was donated to the Egyptian Museum of Berlin (ÄMB 11000) by Julius Isaac in 1891. This may indicate his tomb was looted in antiquity, but this hypothesis is unproven. Egyptologists differ over the location of Shoshenq I's burial and speculate that he may have been buried somewhere in Tanis—perhaps in one of the anonymous royal tombs here—or in Bubastis. However, Troy Sagrillo in a GM 205 (2005) paper observes that "there are only a bare handful of inscribed blocks from Tanis that might name the king (i.e., Shoshenq I) and none of these come from an in situ building complex contemporary with his reign." Hence, it is more probable that Shoshenq was buried in another city in the Egyptian Delta. Sagrillo offers a specific location for Shoshenq's burial—the Ptah temple enclosure of Memphis—and notes that this king built:

Sagrillo concludes by observing that if Shoshenq I's burial place was located at Memphis, "it would go far in explaining why this king's funerary cult lasted for some time at the site after his death."

While Shoshenq's tomb is currently unknown, the burial of one of his prominent state officials at Thebes, the Third Prophet of Amun Djedptahiufankh, was discovered intact in tomb DB320 in the 19th Century. Inscriptions on Djedptahiufankh's Mummy bandages show that he died in or after Year 11 of this king. His mummy was discovered to contain various gold bracelets, amulets and precious carnelian objects and give a small hint of the vast treasures that would have adorned Shoshenq I's tomb.

All content from Kiddle encyclopedia articles (including the article images and facts) can be freely used under Attribution-ShareAlike license, unless stated otherwise. Cite this article:
Shoshenq I Facts for Kids. Kiddle Encyclopedia.