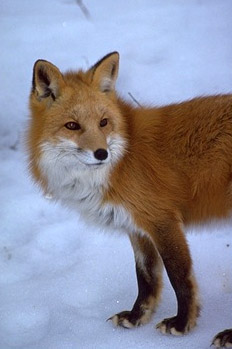 An individual photographed in September, 2010

The Sierra Nevada red fox (Vulpes vulpes necator), also known as the High Sierra fox, is a subspecies of red fox and likely one of the most endangered mammals in North America.

The State of California banned trapping of Sierra Nevada red foxes in 1974 and listed the subspecies as threatened in 1980. The fox is a data gap species in Oregon and designated an Oregon sensitive species by the U.S. Forest Service. The Sierra Nevada Distinct Population Segment is listed as warranted but precluded under the Endangered Species Act. Listing of the Southern Cascades Distinct Population Segment was found to be not warranted.

Like other montane foxes, Sierra Nevada red foxes are somewhat smaller and lighter in weight than lowland North American red foxes. Their pelage may be red, cross, or silver phase with the red phase having the greyish-blonde coloration characteristic of montane foxes. All three phases occur in the Oregon Cascade and Sonora Pass populations, but only red phase individuals have been found in the Lassen population. Pads are fur-covered, a common adaptation to travel over snow. Sierra Nevada red foxes are long-lived relative to other red foxes, five or six years perhaps being a typical lifespan. Non-invasively monitored females have either not bred or bred a minority of years.

Red fox fur was sought after by trappers during the early part of the 20th century because it was softer than that of California’s gray fox (Urocyon cinereoargenteus).

Sierra Nevada red foxes are one of three fox subspecies in the montane clade of North America, occurring in the Cascade Mountains south of the Columbia River and California's Sierra Nevada range. Joseph Grinnell identified separated montane fox populations in the Oregon Cascades, Mount Shasta, Lassen Peak, and Sierra Nevada in 1937. Study then lapsed for approximately 60 to 75 years, depending on location. Rediscovery of the Lassen population began in 1993 followed by detection of a Sierra Nevada population at Sonora Pass in 2010 and rediscovery of the Oregon Cascades population began in 2011. The Lassen and Sonora Pass populations are isolated from each other and it is unknown if a population remains at Mount Shasta.

The extent of the Sierra Nevada red fox populations is an area of active research. In Oregon, ongoing studies at Mount Hood and Central Oregon were prompted by observations in 2012 and 2013. Recent genetic evidence also suggests range expansion into western Oregon since the 1940s. In California, detections occurred in northern Yosemite National Park the winter of 2014-15, the Stanislaus National Forest in late 2015, and in Lassen Volcanic National Park in 2018. The first two areas are near Sonora Pass, but it has not been confirmed the individuals are part of the Sonora Pass population.

A 2005 study of the then remnant population surviving on Mount Lassen found that the foxes are nocturnal hunters whose diet is predominantly mammals, especially rodents and mule deer, supplemented by birds, insects and pinemat manzanita berries as seasonally available. Lagomorphs (hares, rabbits and pikas) were virtually absent from the foxes' diet.

Documented trapping of the Sierra Nevada red fox may have begun when Moses Schallenberger of the Stephens-Townsend-Murphy Party spent the winter of 1844-45 at Donner Pass, taking an average of one red fox every two days.

All content from Kiddle encyclopedia articles (including the article images and facts) can be freely used under Attribution-ShareAlike license, unless stated otherwise. Cite this article:
Sierra Nevada red fox Facts for Kids. Kiddle Encyclopedia.