Silas Casey (July 12, 1807 – January 22, 1882) was a career United States Army officer who rose to the rank of major general during the American Civil War.

Casey was born in East Greenwich, Rhode Island. He graduated from the United States Military Academy in 1826 (39th out of 41). He fought in the Second Seminole War under William J. Worth from 1837 to 1842. During the Mexican–American War he fought at the Battle of Contreras and Battle of Churubusco, and was appointed brevet major on August 20, 1847 for gallant conduct. He then fought in the Battle of Molino del Rey and was severely wounded during the Battle of Chapultepec on September 13, 1847.

After the Mexican-American War, he performed frontier duties and escorted topographical parties, including a trip to California around Cape Horn in 1849. He commanded at Camp Picket during the Pig War on San Juan Island from August 10 to October 18, 1859.

Casey was promoted to brigadier general of volunteers on August 31, 1861, shortly after arriving on the East Coast. He was promoted to colonel in the regular army on October 9. Casey eventually became a division commander in the IV Corps under Brig. Gen Erasmus Keyes. During the Battle of Seven Pines, Casey's division was attacked by D.H. Hill's Confederates and driven from the field in panic. Gen. George McClellan blamed them for the disaster, in spite of the fact that it was the smallest, least experienced, and least well-equipped division in the army and clearly should not have been placed in such a vulnerable location as the Seven Pines crossroads. Casey was removed from division command and replaced by Brig. Gen John J. Peck. For the remainder of the Peninsula Campaign, Casey and his former division were relegated to a post around army headquarters at Harrison's Landing and kept away from the front lines. After the Seven Days battles, when McClellan conducted a review of the army, the soldiers in Casey's division turned their backs and refused to cheer him.

He was promoted to major general of volunteers on July 27 (to rank from July 4) in general promotion of all the army's corps and division commanders. He wrote the three-volume System of Infantry Tactics, including Infantry Tactics volumes I and II, published by the army on August 11, 1862, and Infantry Tactics for Colored Troops, published on March 9, 1863. The manuals were used by both sides during the Civil War. In December 1862 he was appointed to the board that ultimately convicted Maj. Gen. Fitz John Porter of disobedience and cowardice for his actions at the Second Battle of Bull Run.

At the end of the war, Casey received a brevet (honorary promotion) to the rank of major general dated March 15, 1865. He was mustered out of volunteer service and reverted to his regular army rank of colonel on August 24, 1865.

In 1870, he became a hereditary member of the Massachusetts Society of the Cincinnati in succession to his uncle Dr. Lincoln Goodale, who was the son of Brevet Major Nathan Goodale. In 1880 he joined the Aztec Club of 1847 and was succeeded by his son, Silas III, upon his death. General Casey was also a member of the Military Order of the Loyal Legion of the United States as were all three of his sons.

Casey died of a digestive system ailment in Brooklyn, New York on January 22, 1882, and is buried at Casey Farm in Saunderstown, Rhode Island. 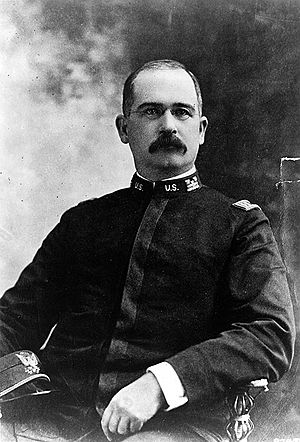 Casey's sons included Silas Casey III, who served as Rear Admiral of the Pacific Squadron, 1901-1903; Brigadier General Thomas Lincoln Casey (who oversaw the completion of the Washington Monument and served as Chief of Engineers in the US Army) and Lieutenant Edward Wanton Casey, an Army officer of Cheyenne Scouts/Troop L/8th Cavalry Regiment USA who was killed in action with the Sioux January 7, 1891.

All content from Kiddle encyclopedia articles (including the article images and facts) can be freely used under Attribution-ShareAlike license, unless stated otherwise. Cite this article:
Silas Casey Facts for Kids. Kiddle Encyclopedia.