Skaneateles ( SKAN-ee-AT-ləs SKIN--) is a town in Onondaga County, New York, United States. The population was 7,112 at the 2020 census. The name is from the Iroquois term for the adjacent Skaneateles Lake, which means "long lake." The town is on the western border of the county and includes a village, also named Skaneateles. Both the town and village are southwest of Syracuse.

The area was part of the former Central New York Military Tract. The town of Skaneateles was formed in 1830 from the town of Marcellus. Early turnpikes facilitated development. The town was noted for participation in reform movements before the Civil War.

The utopian Skaneateles Community in 1843 acquired and successfully operated a large farm and developed small industries. It ultimately failed because of internal difficulties, as well as external concern about its unorthodox social practices. Locally it was sometimes called "No God," because of the atheistic views of members. The Skaneateles Community published a newspaper, the "Comunitist" [sic] between 1844 and 1846, when the community dissolved. Buildings are extant, known as "Community Place," now serving as a bed-and-breakfast.

Some Skaneateles men volunteered for the ill-fated Upper Canada Rebellion (1837) to liberate Canada and were imprisoned by the British in Australia. Quaker congregations were involved in abolition activity. Underground Railroad sites have been documented in Skaneateles. Although the larger city of Syracuse nearby was known nationally as a center of abolition and Underground Railroad activity, Skaneateles was said (by Beauchamp, an early historian) to have "eclipsed Syracuse as an anti-slavery town."

The Brook Farm, Community Place, and Kelsey-Davey Farm are listed on the National Register of Historic Places. 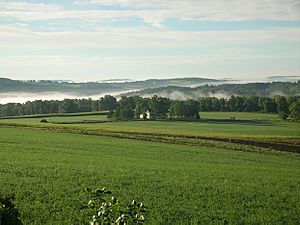 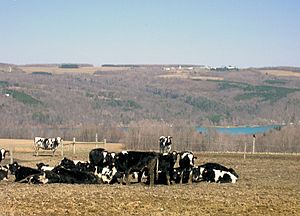 High pasture, west side of lake

Residents and visitors stroll along Skaneateles' pier, just off Clift Park in the village of Skaneateles, for the best view of antique boats during Skaneateles' annual Antique and Classic Boat Show.

Communities and locations in the Town of Skaneateles

The lead character of Elise (Sarah Lancaster) in the Movie "Fir Crazy" stated she was from Skaneateles.

Herman Melville based the narrator in Bartleby, the Scrivener on local resident and lawyer Elijah (Eli) More.

All content from Kiddle encyclopedia articles (including the article images and facts) can be freely used under Attribution-ShareAlike license, unless stated otherwise. Cite this article:
Skaneateles (town), New York Facts for Kids. Kiddle Encyclopedia.