Sly Park Dam is located near Pollock Pines, California in the United States. The dam impounds Sly Park Creek and Hazel Creek, natural tributaries of the North Fork Cosumnes River, to form a 41,000 acre foot (51,000 dam3), 650-acre (260 ha) reservoir called Jenkinson Lake. It was constructed as part of the American River Division of the Central Valley Project to provide irrigation water to a portion of El Dorado County, California. The dam was begun on May 1953, with clearing operations, and was completed in mid 1955. 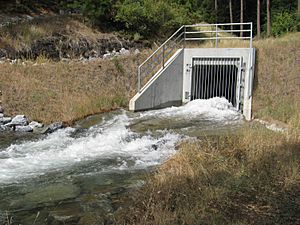 Like most of California, the Jenkinson Lake watershed has a Mediterranean climate, with hot dry summers and cool wet winters. Located on the windward side of the Sierra Nevada, the watershed receives a large amount of precipitation relative to other reservoirs in the Central Valley, such as Folsom Lake. The area receives an annual average precipitation of 51.6 inches. Precipitation typically occurs October through May as rain and snow, though the reservoir's watershed is low enough in elevation that continued runoff from snow pack is not significant. The reservoir is necessary to store water for use during the dry summer months.

Elevation in the watershed ranges from 3400 to 5600 feet. The area is mountainous and consists of steep slopes and rocky outcrops. Soils in the area are deep with high water holding capacity. There is a high potential for landslides and the subsequent siltation of streams. The major mineral deposit in the area is gold. This was an important factor in the development of the area. Gold and other mineral deposits in the area may also be rich in iron and sulfides, which may impact water quality. 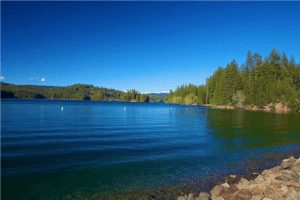 Historical land use in the area included mining, ranching and timber harvesting and milling. Following the discovery of gold in California, miners quickly populated the area. The development of agriculture and commerce followed the miners. Large amounts of water were required for hydraulic mining, and the miners built many water conveyance structures, some of which are still used today. The gold rush was the first significant human impact on the watershed.

Before Sly Park Dam was built, the area where the reservoir now exists was known as Sly Park Ranch. Grazing and agriculture took place at Sly Park Ranch. There was also a timber mill, Sly Park Mill, located near the second dam on Sly Park Creek.

Current land use in the watershed is predominately Forest/Recreational use. Most of the land is publicly owned. The major land owners are El Dorado Irrigation District, the US Bureau of Reclamation, and the USDA Forest Service. Private landowners include the timber companies Sierra Pacific Industries and Georgia Pacific, which have had a large influence on timber management in the region. Smaller logging operations are authorized on the Forest Service lands as well as recreational uses. Recreational use includes off highway vehicle trails, mountain biking, hunting, and horseback riding among other activities.

Water from Jenkinson Lake is used for municipal water supply, irrigation, and recreation. Historically, irrigation water for agriculture was the greatest water user. As the area develops and the population grows, municipal and commercial water users become more important. Municipal users are now the primary water users of water from Jenkinson Lake, though agriculture is still a significant user. Future population growth, climate change, and water reuse technology and conservation will influence water use in the future.

Agriculture remains a significant water user despite the rapid urban development in the area. El Dorado County contains many orchards, vineyards, and pastures that demand large quantities of irrigation water seasonally. Apple Hill Growers Association farms and ranches are located in nearby Camino. Apple hill includes orchards, Christmas tree farms, pumpkin patches and other agriculture related tourist destinations. While traditional livestock grazing in the area has declined since it was first settled, agricultural water use will likely continue to grow.

Because of the lake's recreation potential, population in the area is seasonal. There are many vacation homes in the immediate area of the reservoir. The seasonal population places greater demands on the water system during the summer months, during which recreational opportunities are numerous.

In general, the demand for water is increasing as supplies become less reliable. Increased urbanization and suburban development in EID's service area places greater demand on water supplies and creates more wastewater and stormwater that must be dealt with. Agriculture, while grazing has become less common, other potentially water intensive crops have become more popular, such as fruit trees and grapes in orchards and vineyards. Agriculture, in addition to the area's naturally scenic qualities, has also increased tourism and recreational use. The population in the area is seasonal and places greater demand on the water system during the time of the year when supplies are most scarce: summer and fall. Climate change has the potential to reduce the water available for storage, and the area has few other water resources, with many areas remote enough to be isolated from the piping required to supply water from the rest of the Central Valley Project. 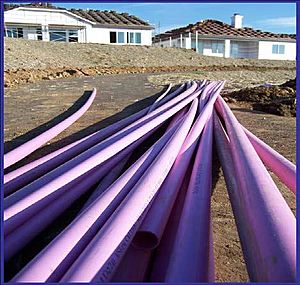 EID is addressing future water use in several ways. Municipal conservation is important in reducing demand. Encouraging water saving appliances, faucets, toilets, and shower heads will reduce municipal use without requiring the public to ration their water. Leak detection and piping improvements are also being used to reduce the water lost in the distribution system. The most important water conservation measure may be the reuse of wastewater, also called reclaimed water, for urban landscaping and golf courses. As the area develops, more wastewater is produced. By reusing the water for irrigation municipal water use is greatly reduced, as nearly half of most residential water use goes to landscaping.

All content from Kiddle encyclopedia articles (including the article images and facts) can be freely used under Attribution-ShareAlike license, unless stated otherwise. Cite this article:
Sly Park Dam Facts for Kids. Kiddle Encyclopedia.