Kids Encyclopedia Facts
This page is about Smith Creek in Santa Clara County. For other creeks with the same name, see Smith Creek.

Smith Creek is a 14-mile-long (23 km) perennial stream which flows along the western flank of Mount Hamilton in Santa Clara County. The creek begins near Bollinger Ridge, about 7.7 km SxSW of Mount Hamilton.

Some of the early recorded history of the Smith Creek watershed is associated with the pioneer family of the Winsors.

Where Mt. Hamilton Road crosses Smith Creek, there used to be the Hotel Santa Ysabel. 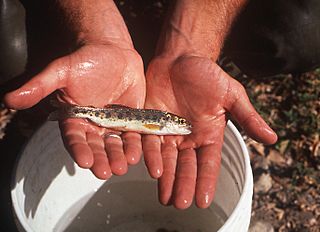 Impassable falls are present on upper Arroyo Hondo, but the rainbow trout in Smith and Isabel creeks are assumed to be native, as California roach (Hesperoleucus symmetricus) and Sacramento sucker (Catostomus occidentalis occidentalis) are also present above and below the falls. Speckled dace (Rhinichthys osculus) were collected by John Otterbein Snyder in 1905 in Arroyo Hondo and Isabel creeks, but not by Scoppettone and Smith in 1978, having disappeared from most of their former sites in the central coast.

River otter (Lontra canadensis) are among the rare species observed at the University of California, Berkeley Blue Oak Ranch Reserve (in June 1999), on the Smith Creek tributary of Arroyo Hondo.

All content from Kiddle encyclopedia articles (including the article images and facts) can be freely used under Attribution-ShareAlike license, unless stated otherwise. Cite this article:
Smith Creek (Arroyo Hondo tributary) Facts for Kids. Kiddle Encyclopedia.