Smithfield is a town in Isle of Wight County, in the South Hampton Roads subregion of the Hampton Roads region of Virginia in the United States. The population was 8,089 at the 2010 census.

The town is most famous for the curing and production of the Smithfield ham. The Virginia General Assembly passed a statute defining "Smithfield ham" by law in 1926, with one of the requirements that it be processed within the town limits. Smithfield Foods, a Chinese Fortune 500 company that owns Smithfield Packing Company and others, is the world's largest pork processor and hog producer. The company, based in Smithfield, raises 12 million hogs and processes 20 million pounds of them annually.

Smithfield, first colonized in 1634, is located on the Pagan River, not far from Jamestown. The Native Americans knew this area as Warascoyak, also spelled Warrosquoyacke, meaning “point of land.”

Warrosquyoake Shire (with numerous variant spellings, including Warrascoyack, Warrascocke and "Warwick Squeak") was officially formed in 1634 in the Virginia colony, but had already been known as "Warascoyack County" before this. It was renamed Isle of Wight County in 1637.

In 1730, the Tobacco Inspection Act of 1730 established "Warricksqueak Bay, in Isle of Wight County" as the site of an official tobacco inspection house.

The town was established in 1752 by Arthur Smith IV as a seaport. The original survey and plat of the Town of Smithfield was made by Jordan Thomas, County Surveyor, for Captain Arthur Smith in 1750.

As a river town, its life and growth were dependent on the river. “Wharf Hill” was the waterfront location of the beginning of the industries of Smithfield, which would evolve into “The Peanut Capital of the World” and “The Ham Capital of the World." George Purdie, Gent., a County Justice and Postmaster of Smithfield during his lifetime, purchased Lots 4 & 5 of the original plat of the Town of Smithfield in 1763. Purdie's neighbor, Captain Mallory Todd, built the business of curing and shipping the hams that has made Smithfield world-famous. {George Purdie Merchant of Smithfield by Doris Gwaltney, a descendent by marriage}. The peanut industry continued until the fire of 1921, which destroyed the peanut warehouses and therefore the growing peanut businesses; the peanut trade then moved to the nearby railroad hub of Suffolk, Virginia.

There were both Revolutionary and Civil War actions in and around the town, mostly due to its proximity to the James River. Wharf Hill was used as a safe harbor for receiving arms and supplies for revolutionary patriots and a vantage point from which Federal cannon fire showered Main Street. Its dock has welcomed the fictional drama of the real “Show Boat” (James Adams Floating Theatre).

The Mansion on Main was the showplace home of a Victorian era "Virginian of Virginians", R. S. Thomas (1837–1915)—restored by Sala Clark in the late 1990s—whose 1889 "urban" Queen Ann style mansion changed the face of Smithfield (colonial and cottage), and whose efforts helped to save a nearby National Landmark, the 1632 St. Luke's Church. Thomas literally "wrote the book" on St. Luke's Church, “The Old Brick Church Near Smithfield, Virginia,” specifically to champion its 1632 date and legacy. He presented it before the Virginia Historical Society on December 22, 1891. “It is my object to prove that this Church was built in 1632, and I shall prove it, 1. By the existence at that early date, of such strong, religious sentiment, as demanded a house of worship to the living God; 2. By tradition; 3. By lately existing records; and – 4. By the bricks and mortar of the Church itself.”

Today, Smithfield is a small town community striving to preserve its southern charm. Currently Smithfield has a population of 8,100 and is approximately 10.1 square miles (26 km2) in size. The ham production operation was purchased by a Chinese firm in 2014. 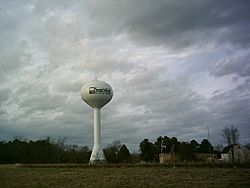 Known as the ham capital of the world, Smithfield currently attracts many tourists. Smithfield's Historic District is a major attraction. Historic buildings that lure tourists include the Isle of Wight County Museum, Historic Fort Huger, the Schoolhouse Museum, the Old Courthouse of 1750, and Historic St. Luke's Church located just outside downtown. Countryside attractions just outside Smithfield include Boykin's Tavern Museum, the Isle of Wight Courthouse of 1800 and Darden's Country Store & Smokehouse. The Jamestown/Scotland Ferry (located in Surry) also allows tourists to visit Williamsburg, Virginia, as well, linking Smithfield to the historic triangle. Smithfield is also a convenient day trip from Norfolk, Richmond, and Virginia Beach. Smithfield's Historic District includes over 70 buildings of exceptional architectural importance, including residences of the Colonial, Federal, and Victorian periods. Sites of historic interest in Smithfield include the 1750 Court House, the adjacent colonial tavern that is now the Smithfield Inn, the Isle of Wight Museum, the Schoolhouse Museum, the Wentworth-Grinnan House, and Windsor Castle Park.

All content from Kiddle encyclopedia articles (including the article images and facts) can be freely used under Attribution-ShareAlike license, unless stated otherwise. Cite this article:
Smithfield, Virginia Facts for Kids. Kiddle Encyclopedia.