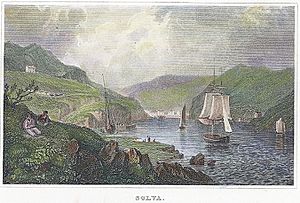 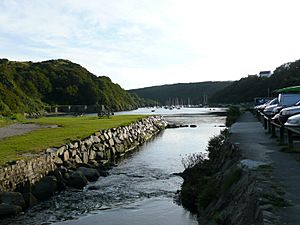 The rocks at the entrance to Solva Harbour made it one of the most sheltered anchorages between Fishguard and Milford Haven; it was marked on a 1578 parish map of Pembrokeshire as Dolvath Haven. On a 1748 map it is named Solvach.

Solva became the main trading centre of St Bride's Bay in the medieval period, and was important for lime burning. A prominent row of lime kilns is preserved at the harbour edge. By the end of the 18th century Solva had begun to expand, and could accommodate vessels of 500 tons, or up to 1,000 in an emergency. Some 30 vessels were registered to the port at this time, though this number reduced during the 19th century. The fading coastal trade was replaced by tourism, and the harbour became a leisure boating centre.

In 1943 the RAF established an airfield, named RAF St Davids, but which now lies within Solva community. The area was the subject of an archaeological survey in 2000.

The village was the location for Wales's first butterfly farm, Solva Nectarium, which opened in 1979.

Solva Harbour is a good example of a ria — a flooded coastal valley or inlet. Local rocks contain fossils from the Cambrian period, and the village gives its name to the Solva Group, a rock sequence.

An electoral ward of the same name exists. This ward extends to Brawdy and in fact some of the community was transferred there. The total population of the ward at the 2011 census was 1,877.

Every year on Easter Monday Solva hosts a Duck Race for charity. The ducks are released into the River Solva near Middle Mill and float down stream to Solva harbour. The winner is the first to cross under the footbridge in lower Solva car park.

Each summer, Solva hosts a regatta which features rowing for adults and children.

Solva now hosts its own festival each year being held at the end of July or Beginning of August. The festival is called 'The Edge Festival Solva' with its profits going to community based projects

The local cliff coast is popular with walkers, and the classic cliff exposures of Cambrian rocks attract amateur and professional geologists.

Solva Woollen Mill, located at the nearby village of Middle Mill, claims to be the oldest continuously working woollen mill in Pembrokeshire. Today the mill mostly manufactures carpets and rugs. There is a tearoom and a shop, and visitors are able to see the looms at work.

There are 37 listed structures in the community, including the church (of Whitchurch parish) of Saint Aidan.

In June 2014 Solva was used as a location for the filming of Dylan Thomas's Under Milk Wood.

All content from Kiddle encyclopedia articles (including the article images and facts) can be freely used under Attribution-ShareAlike license, unless stated otherwise. Cite this article:
Solva Facts for Kids. Kiddle Encyclopedia.