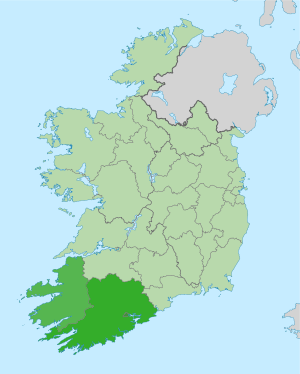 The South-West region of Ireland with each constituent county/city council highlighted.

The South-West Region (coded IE053) is a NUTS Level III statistical region of Ireland. It consists of the territory of Cork City, the regional capital, as well as the counties of Cork and Kerry. The South-West region spans 12,161 km2, roughly 16% of the total area of the state and according to the 2016 census has a population of 689,750.

The South-West Region benefits from a mild climate and has a very scenic environment, which includes features such as MacGillycuddy's Reeks (the highest mountain range in Ireland), the Dingle Peninsula, Mizen Head and the Iveragh Peninsula along with numerous small islands. 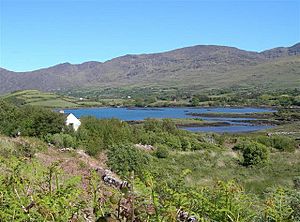 The South-West region has experienced a steady increase in its population with migration to the region due to its strong educational infrastructure, scenic beauty, mild climate, as well as its quality of life and work.

The southwest is the home of "Munster Irish", and contains a number of nationally significant Gaeltacht areas, such as Dingle, Cape Clear Island and Muskerry. 14% of Ireland's Gaeltacht population lives in Cork and Kerry. According to the 2016 Census, 43% of Kerry and 45% of Cork are able to speak Irish.

The population of the regional capital, Cork City, including its suburbs was 208,669.

Ireland's southernmost and westernmost points are located in the Southwest. Including islands Tearaght Island is the westernmost point located 12.5 km west of the Dingle Peninsula in Kerry. The southernmost point is Fastnet Rock which lies 11.3 km south of mainland County Cork. Only including mainland Ireland, Brow Head, County Cork is the southernmost point and Dunmore Head, County Kerry is the westernmost point. Ireland's twelve highest mountains are located in County Kerry. Killarney National Park in Kerry has Ireland's only native herd of Red Deer and the most extensive covering of native forest remaining in Ireland. The southwest has a total of 132,274 hectares (326,856 acres) of Forest and woodland area, larger than six different Irish counties. The area of the Southwest is 12,203 km2, roughly 14.5% of Ireland's land area which is large enough to fit the 10 smallest counties inside it and almost as large as Northern Ireland. The combined coastline of Cork and Kerry is 1,778 km including islands.

A list of the ten largest settlements in the southwest County capitals are included and are shown in bold. 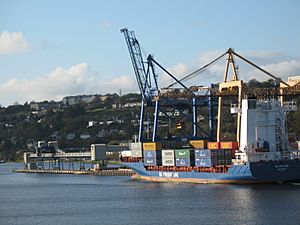 Cork Harbour, one of the world's largest natural harbours, serves as an economic gateway to the southwest.

The region's economy consists of a range of multi-national companies that specialise in areas such as electronics and pharmaceuticals. The food industry also forms an important sector in the regional economy. Tourism is also a major industry in the region.

The 2016 unemployment rate for the South-West region, at 5.7%, is the lowest of any other Irish NUTS region.

The south west region is the base for several sporting teams such as professional association football teams, Cork City FC and Cobh Ramblers, who compete in the League of Ireland, Kerry GAA and Cork GAA, who compete in the All-Ireland and Munster Championship in traditional Irish sports, Gaelic Football and Hurling and American Football team, Cork Admirals. Teams also compete in rugby, cricket, hockey and various other sports.

All content from Kiddle encyclopedia articles (including the article images and facts) can be freely used under Attribution-ShareAlike license, unless stated otherwise. Cite this article:
South-West Region, Ireland Facts for Kids. Kiddle Encyclopedia.