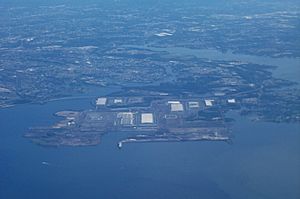 Sparrow's Point is an unincorporated community in Baltimore County, Maryland, United States, adjacent to Dundalk. Named after Thomas Sparrow, landowner, it was the site of a very large industrial complex owned by Bethlehem Steel, known for steelmaking and shipbuilding. In its heyday in the mid-20th century, it was the largest steel mill in the world. The site of the former Bethlehem Sparrows Point Shipyard and steel mill is now renamed Tradepoint Atlantic in a revitalization program to clean up the environment and make it one of the largest ports on the East Coast of the United States. Today Sparrows Point is home to many distribution centers, fulfillment centers, training lots, storage lots, and the like, including those operated by Under Armour, Amazon, Home Depot, Volkswagen, and McCormick & Company.

Sparrow's Point was originally marshland home to Native American tribes until being granted to one Thomas Sparrow Jr. (1620 - 1674) by Cecilius Calvert, 2nd Baron Baltimore in around 1652. His son Solomon Sparrow made a home there, calling it "Sparrow's Nest". Later in the 1700s the area became home to other families, who farmed and raised crops, building homes and hunting lodges. Among the many wealthy residents of Baltimore who owned property there was Major General George H. Steuart who hosted the social reformer Dorothea Dix at Sparrow's Point. By the 1860s much of the land, about 385 acres, was owned by the Fitzell family.

Sparrow's Point remained largely rural until 1887, when an engineer named Frederick Wood realized that the marshy inlet would make an excellent deep-water port for the Pennsylvania Steel Company. The Fitzells were reluctant to part with their peach orchards but were eventually persuaded to sell.

Steel was first made at Sparrow's Point in 1889, by the Pennsylvania Steel Company. By the mid-20th century, the Sparrow's Point plant was the world's largest steel mill, stretching 4 miles (6.4 km) from end to end and employing tens of thousands of workers. It used the traditional open hearth steelmaking method to produce ingots, a labor- and energy-intensive process.

Bethlehem Steel purchased the mill in 1916. The mill's steel ended up as girders in the Golden Gate Bridge and in cables for the George Washington Bridge, and was a vital part of war production during World War I and World War II. The mill was serviced by four railroads: the Western Maryland; Pennsylvania; Baltimore & Ohio; and yard work was done by the Patapsco & Back River Railroad.

By 1961, the mill was producing 672,000 short tons (610,000 t) of steel per year. Changes in the steel industry, including a rise in imports and a move toward the use of simpler oxygen furnaces and the recycling of scrap, led to a decline in the use of the Sparrow's Point complex during the 1970s and 1980s. From 1984 through 1986, an effort to modernize resulted in the successful installation of a basic oxygen furnace (BOF), continuous caster and supporting management information systems. However, this effort to save the plant and Bethlehem Steel was, perhaps, too little too late. The Sparrow's Point plant was owned by Mittal Steel following its acquisition of Bethlehem Steel successor company International Steel Group in 2005. In March 2008, Mittal Steel sold the plant to the Russian company Severstal for $810 million.

In 2012, the Sparrow's Point steel mill was purchased along with other mills in Ohio and West Virginia by Renco Group Inc. for $1.2 billion. This made Renco the fifth owner in the last ten years. RG Steel, LLC, a unit of Renco, ran the facility until it filed for bankruptcy on May 31, 2012.

In September 2014, the 3,100 acre property was purchased by Sparrows Point Terminal, LLC (SPT). SPT also entered into agreements with the Maryland Department of the Environment (MDE) and the United States Environmental Protection Agency, under which SPT agreed to develop and execute plans to complete environmental cleanup of the site The agreements require SPT to establish a $43 million trust fund and provide MDE with a $5 million letter of credit to ensure that the cleanup work is completed (but the company remains obligated to complete the remediation work in accordance with those agreements, even if the cost exceeds $48 million). SPT also agreed to provide the United States Environmental Protection Agency with $3 million to perform additional offshore investigation and, if necessary, offshore remediation. Both the purchase of the property by SPT and the company's agreements with MDE and USEPA were hailed by government and business leaders as a positive turning point for Sparrows Point. Maryland's Secretary of the Environment, Robert M. Summers, described the agreements as providing a "clear path to completion" of the environmental cleanup and an "extraordinary level of protection for the environment and public health." Viewing the environmental cleanup as the first step toward major economic revitalization for Sparrows Point and the surrounding region, Baltimore County Executive Kevin B. Kamenetz stated that "the future for returning thousands of family-supporting jobs to Sparrows Point looks brighter than it has in many decades." According to one of SPT's executives, the company's plans for redevelopment include transforming the site into "one of the largest ports on the East Coast."

During the 1970s, Bethlehem Steel invested millions of dollars in upgrades and improvements to the Sparrow's Point yard, making it one of the most modern shipbuilding facilities in the country. This included the construction of a large graving dock to allow for the construction of large supertankers up to 1,200 feet (370 m) in length and 265,000 short tons (240,000 t) (gross) in size.

The Sparrow's Point shipyard complex was sold at auction to Barletta Industries Inc. in 2004. Barletta is attempting a redevelopment of the site for use as a business and technology park, and plans to revive shipbuilding on at least part of the site, making use of the modern graving dock added in the 1970s.

In 2007, the international energy company AES Corporation applied to the federal government for a certificate to build and operate a liquefied natural gas (LNG) terminal at Sparrow’s Point. The AES Sparrow’s Point LNG development would consist of three 160,000-cubic meter storage tanks and vessel offloading systems for LNG tankers. AES would also construct a new natural gas pipeline, the Mid-Atlantic Express, which would run north from Maryland into Pennsylvania crossing under the Susquehanna River to connect with existing natural gas pipelines. The 33-inch-diameter (840 mm) buried pipeline would be 88 miles long. The Federal Energy Regulatory Commission (FERC) approved the project in January 2009, over the objections of state and county officials in Maryland and Pennsylvania. FERC chairman Jon Wellinghoff cast a dissenting vote, stating that in his opinion the region’s energy needs could be better met without including LNG in the mix. The Maryland Department of the Environment denied Sparrow's Point a water-quality permit that would allow the company to dredge in Baltimore Harbor. A citizens’ group, the LNG Opposition Group, also opposes the project.

All content from Kiddle encyclopedia articles (including the article images and facts) can be freely used under Attribution-ShareAlike license, unless stated otherwise. Cite this article:
Sparrows Point, Maryland Facts for Kids. Kiddle Encyclopedia.