The trail extends from Sontag Park in Nine Mile Falls, Washington to the Washington/Idaho border. It passes through the cities of Spokane, Washington, Spokane Valley, Washington, Liberty Lake, Washington and the unincorporated community of Spokane Bridge, before crossing under the Interstate 90 Spokane River Bridge—traveling through Kootenai County, Idaho for approximately 250 feet (76 m)—and then continuing through Washington for about 2,000 feet (1 km), before meeting with the North Idaho Centennial Trail at the Washington–Idaho border. The trail is divided into three sections: Riverside refers to the section of the trail within Riverside State Park, Urban refers to the section within the city of Spokane, and Valley refers the section east of Spokane (almost all of which lies in the Spokane Valley, hence the name). After the border into Idaho, the trail continues as the North Idaho Centennial Trail. 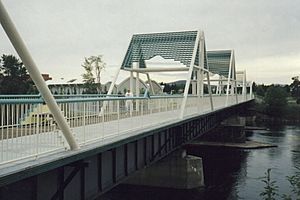 Following the Expo '74, advocates proposed a mixed use pathway along the river. Citizens in Washington and Idaho expanded the idea by 1986 by joining forces and suggesting a much longer trail that could be completed in time to celebrate the respective state centennials of Washington (1989) and Idaho (1990). In 2010, it was designated a National Recreation Trail.

All content from Kiddle encyclopedia articles (including the article images and facts) can be freely used under Attribution-ShareAlike license, unless stated otherwise. Cite this article:
Spokane River Centennial Trail Facts for Kids. Kiddle Encyclopedia.