Spokane Valley is a city in Spokane County, Washington, United States, and the largest suburb of Spokane. It is located east of Spokane, west of Coeur d'Alene, Idaho and surrounds the town of Millwood on three sides. The city incorporated as the City of Spokane Valley on March 31, 2003. The Washington State Office of Financial Management estimates the city’s population as 94,919 as of 2015. Spokane Valley is named after the valley of the Spokane River, in which it is located. Before becoming an incorporated city, the area was and still is referred to as "The Valley" by residents of the Spokane Metro Area.

For thousands of years, the Spokane Valley area was populated by members of the Upper Band of the Interior Salish Indians, calling themselves “Sn-tutuul-i”, the meaning of which is not known. In about 1783, fur traders from the North West Company began traveling through the area. They called these Indians the “Spokanes” which has been interpreted as meaning “Children of the Sun.” The Spokanes were a peaceful people, on friendly terms with neighboring tribes and later the fur traders and missionaries who came to the area. They fished salmon, hunted game, and ate camassia roots and berries they gathered.

Despite their many years of acceptance of the white settlers, and the calming influence of Chief Garry (sometimes Spokan Garry), the Spokanes protested the loss of their lands by joining in the Indian Rebellion of 1857. The final battle, in 1858, culminated in the Spokane Valley with the destruction of over 800 of their horses, their food, and teepees. The Spokanes were eventually forced from the lands of their ancestors to a reservation north of the Spokane River, just west of the Spokane area.

The first permanent white settler in the Spokane Valley was a retired French-Canadian trapper, Antoine Plante, who built a small cabin near the Spokane River in 1849. Plante ran a small Hudson's Bay Company trading post in the home he shared with his American Indian wife and family. In 1850, Plante constructed and operated the first ferry across the Spokane River, the only means of crossing the river in the area. It was used for transportation across the river by Fort Colville military personnel, U.S. Army surveyors, and miners traveling to western Montana and southeastern British Columbia.

In 1862, A. C. "Charley" Kendall established a store on the north side of the Spokane River. A bridge to cross the river at Kendall's store was soon built by Joe Herring, Timothy Lee, and Ned Jordan in 1864. A small community, known as Spokane Bridge, began to build up near the bridge. M. M. Cowley took over the holdings of Charley Kendall in 1872, including the bridge, a trading post and a log hotel.

Before the turn of the century, early pioneers, many of them silver miners, arrived from the East by way of the Northern Pacific and Great Northern railroads, for which Spokane was a major hub. By 1883, the first transcontinental rail was established. The railroad activity created support for extensive shops and facilities. Within a few years, Spokane was tied to the outside world by five transcontinental railroads, making it the hub of commerce it remains today.

Irrigation efforts stimulated population growth in the Spokane Valley significantly in the early part of the 20th century. Developers and real estate speculators tapped into nearby lakes, the Spokane River and the aquifer lying under the valley in an effort to turn the dry land into saleable agricultural land. In 1899, the Spokane Valley Land and Water Co., later owned by long-time irrigation advocate D.C. Corbin, built a canal to irrigate land in the Greenacres area with water from Liberty Lake. In 1905, the Spokane Canal Company built a canal to irrigate the Otis Orchard area with water from Newman Lake, and Modern Irrigation and Land Company tapped into the underground aquifer to irrigate 3,000 acres (12 km²) in Opportunity. Within just twenty years, 30,000 acres (120 km²) of dry land was converted into fertile farmland. Water access greatly increased land values. Valley population grew from 1,000 residents in 1900 to nearly 10,000 by 1922. Extensive apple orchards thrived in the gravelly soil of the Valley, and by 1912 nearly 2 million apple trees had been planted. A huge packing plant was built in 1911 by the Spokane Valley Growers Union.

With the exception of the incorporated Town of Millwood, Washington, the Spokane Valley was developed as townships with no governmental functions. Most of the townships platted in the early 1900s were surveyed as a tool for promotion and sales, and remain as names for neighborhoods and post office designations today.

A few Spokane Valley townships were developed for residential and/or business purposes. Trent was originally platted as a residential area for Northern Pacific railroad workers in 1881, Millwood began as a “company town”, developed by Inland Empire Paper Mill for their employees, and Dishman developed primarily as a business center. All other Valley townships were developed as irrigation districts and owe their existence to their agricultural roots. Between 1901 and 1915, the townships of Orchard Avenue, Greenacres, Otis Orchards, Opportunity, Vera, Dishman, Liberty Lake, Newman Lake, East Spokane, Mica and Chester were platted. Pasadena Park is a populated place located in Spokane County at latitude 47.697 and longitude -117.283, North of Millwood across the Spokane River that existed at least as early as 1916.

The Spokane Valley was promoted as a wonderful place to live. Though most Valley residents were farmers or orchardists, canneries, brickyards, railroad maintenance facilities and lumber mills provided jobs for many. The beauty of the surrounding area, pleasant communities, fertile farmlands, business opportunities, outdoor sports and activities, local recreational areas and community organizations caused it to be called “Spokane Valley, the Valley Bountiful”. As the population increased, small communities with schools, churches, businesses, community clubs and organizations thrived. Tied to Spokane, local lakes and Coeur d’Alene by railroads and bus systems, the people of the Valley enjoyed a full life.

In the years that followed, crop troubles and irrigation system maintenance problems prompted many residents to sell their farms in five, ten, or 20-acre (81,000 m2) plots for suburban home sites. Many of the apple trees were pulled out and replaced by neighborhoods and truck farms. The truck farms were successful in raising strawberries, raspberries, tomatoes, beans, peas, watermelons, asparagus, squash, cucumbers and thousands of acres of Heart of Gold cantaloupes. Dairy, poultry and fur farms also appeared in the Valley during these years.

While jobs were scarce during the Great Depression, most people in the Spokane Valley had enough land to grow food for their families. The Spokane Valley Chamber of Commerce adhered to a positive agenda throughout these hard times. They placed street signs on Valley roads and in an effort to show solidarity with Spokane, east-west roads were renamed to correspond with Spokane’s roads. Observing that fires were a constant and catastrophic problem for area residents, the Chamber lobbied to begin a fire protection district in the Valley. Their efforts were successful and Valley residents were first offered fire protection in 1940, with the formation of Spokane County Fire Protection District Number One.

The people of the valley always maintained independence from the City of Spokane on its borders. The first local newspaper, The Spokane Valley Herald, was launched in 1920. In 1919 an early municipal airfield was carved out, later named Felts Field in honor of Herald owner Buell Felts who died in a plane crash there. A streetcar line was started as early as 1908, and later extended to Liberty Lake in the east part of the valley, where entertainment facilities were built for music and outdoor gatherings. Other than Millwood, which incorporated in 1927 and Liberty Lake, Washington which did so in 2001, the Valley remained unincorporated throughout the 20th century.

Industry began to replace agriculture more rapidly after the completion of Grand Coulee Dam in 1941, which combined cheap electricity with readily available water from the Spokane River and the extensive aquifer which underlies the Valley. At its height, the Valley was the site for an aluminum plant, a cement plant and a paper mill. Plans to attract light industry through the establishment of an industrial park at a former military depot were not very successful. The cement plant closed in the 1950s, but the paper mill and aluminum plant remain.

In the 1950s a further transformation swept the valley as the post World War Two population boom began to push into the valley, replacing most of the remaining apple orchards with tracts of houses. The first shopping mall was built at University Village on Sprague Avenue (formerly called Appleway), which became the major artery through the Valley, lined with stores and restaurants. The last large-scale orchard irrigations ended in the late 1950s, canvas pipes running down residential streets replacing the old ditches by that time.

In the later decades of the last century the Valley experienced a large influx of retirees due to inexpensive housing and the relatively dry weather. Retirement complexes and apartment blocks began to appear. At the present time the Valley remains principally a suburban area, a mixture of families and retirees and the retail commerce to support them. In the 1990s and the early part of the twenty-first century the Spokane Valley continued to grow more urban, becoming one of the fastest growing regions in the state. Commercial growth increased and joined residential growth as it moved towards the state line. The urban development included the opening of the long-awaited Spokane Valley Mall in 1997, the establishment of dozens of other businesses along business corridors, and the development of the Mirabeau Point community complex. 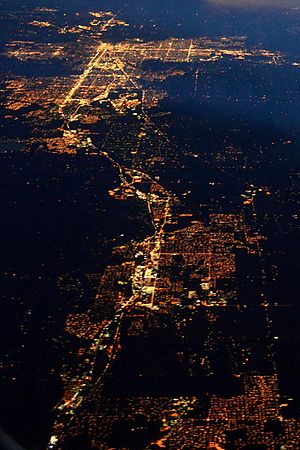 Spokane Valley city proper consists of the communities of Dishman, Greenacres, Opportunity, Trentwood, Veradale, Yardley, and parts of Chester and Otis Orchards. According to the United States Census Bureau, the city has a total area of 38.06 square miles (98.57 km2), of which, 37.77 square miles (97.82 km2) is land and 0.29 square miles (0.75 km2) is water.

Because the City of Spokane Valley shares its name with the unincorporated area it was carved from, the term "Spokane Valley" is often used in reference to an area greater than that which falls within the city limits.

There were 36,558 households of which 31.6% had children under the age of 18 living with them, 45.6% were married couples living together, 12.2% had a female householder with no husband present, 5.4% had a male householder with no wife present, and 36.8% were non-families. 29.0% of all households were made up of individuals and 11.2% had someone living alone who was 65 years of age or older. The average household size was 2.43 and the average family size was 2.99.

The Spokane Valley Heritage Museum opened its doors on August 18, 2005, and is located in the historic Opportunity Township Hall. The museum's goal is to collect, preserve and exhibit the history and culture of the Spokane Valley for the education and inspiration of the community. Visitors and researchers are welcome to search in the museum's vast archives of photos and documents, as well as view the current exhibits.

All content from Kiddle encyclopedia articles (including the article images and facts) can be freely used under Attribution-ShareAlike license, unless stated otherwise. Cite this article:
Spokane Valley, Washington Facts for Kids. Kiddle Encyclopedia.