Springsure is a small town in Central Highlands Region, Queensland, 66 kilometres (41 mi) south of Emerald on the Gregory Highway. It is 765 kilometres (475 mi) northwest of Brisbane. At the 2006 census, Springsure had a population of 829.

The area was originally occupied by Aboriginal people, for thousands of years.

Ludwig Leichhardt was the first European to explore the area between 1843 and 1845. His favourable reports encouraged settlers to move in and settle the land being traversed by local Aboriginal groups. Squatter Horatio Wills and a party of Victorian settlers arrived near modern-day Springsure in 1861. Two weeks later, 19 men women and children, including Wills, were killed by Aboriginal Australian people, the Kairi or Gayiri, in the Cullin-La-Ringo massacre, the largest massacre of European settlers by Aborigines in Australian history. At least 15 Aboriginal men, women and children were killed by the Queensland Native Police and militias of local European colonists and their employees, in a series of reprisals over the months that followed. However, the massacre of the 19 European family members was itself a retaliatory response to an earlier shooting of fugitive murderer who was Gayiri tribesman by Jesse Gregson (manager of nearby Rainsworth Station) with Second Lieutenant Alfred March Patrick and Native Police Troops in his command. Prior to the massacre of the 19 colonists, Second Lieutenant Patrick had complained, in early 1861, to Charles Dutton (lessee of Bauhinia Downs pastoral lease 148 km south-east of Springsure) that other officers in the Queensland Native Police "...had been able to bag their first Aborigine after only a few weeks in the Force; he had served for six months and still had not yet killed a black." The Old Rainworth Fort was built in 1862 by the colonists of Springsure in order to defend themselves from future raids by Aboriginals . 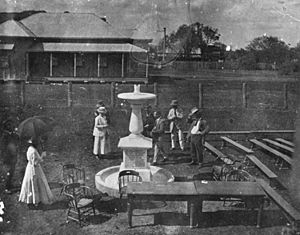 On 6 December 1919, the Springsure State School Memorial Fountain was dedicated by Mrs Annie Wheeler (née Laurie), a former pupil at the school. The memorial is a marble fountain and commemorates students of the school who served in World War I.

On 16 November 1943 a Douglas C-47A Skytrain broke up in mid-air during a violent storm in the area, and crashed on Rewan Station, just south of Spingsure. All 19 people on board the aircraft perished in the crash.

Springsure has a number of heritage-listed sites, including:

A cliff face in the hills surrounding Springsure is known to the area as Virgin Rock, named because it once looked like the Virgin Mary cradling the baby Jesus, although years of erosion have blurred the original resemblance.

All content from Kiddle encyclopedia articles (including the article images and facts) can be freely used under Attribution-ShareAlike license, unless stated otherwise. Cite this article:
Springsure Facts for Kids. Kiddle Encyclopedia.