The name "Squirrel Hill" may have been given to the area by the Native Americans who lived in its vicinity. The neighborhood most likely was named for the abundance of gray squirrels.

The growth and development of Squirrel Hill was initially focused on the riverfront along the Monongahela River. The first recorded house was built in 1760 by a soldier at nearby Fort Pitt, Colonel James Burd, at a place called Summerset on the Monongahela River. Squirrel Hill's next house was built by Ambrose Newton some time in the 1760s. This house is still standing and is located in what is now Schenley Park along Overlook Drive (near the ice skating rink). Its first "business district" was the intersection of Brown's Hill Road and Beechwood Boulevard.

In 1778, John Turner built his estate of Federal Hill nearby (along what is now Beechwood Boulevard). He later established the Turner cemetery in 1838 inside his estate, which he donated to the local community when he died in 1840. This cemetery holds the remains of many of the original settlers of Squirrel Hill. The Mary S. Brown Memorial Methodist church was also built on adjoining lands donated by Turner. This church was rebuilt several times, but the current building, which dates from 1908, is the oldest standing church in Squirrel Hill

The third house in Squirrel Hill, Neill Log House, was built by Robert Neill around 1787, also in what is now Schenley Park. This house still exists and is occasionally open to the public. The Neills owned 262 acres (1.06 km2) of land in the northern section of Schenley Park. In 1795, the Neills moved from this house to a location in what is now Market Square in downtown Pittsburgh. After they died, the house was handed down to two different people before it was sold to General James O'Hara. O'Hara's granddaughter, Mary Schenley, gave the property to the city of Pittsburgh in 1889. For a time, the house was rented out by the city to vacationers, but by 1969, the house was in such poor condition that it was dismantled and rebuilt by the Pittsburgh History and Landmarks Foundation. It still exists and is open for tours during the Vintage Grand Prix in July.

Around 1820, William "Killymoon" Steward built one of the first tavern/inns in the area. His tavern, located near the intersection of Beechwood and Brown's Hill Road, survived for over 100 years. Slowly, Squirrel Hill became a prosperous and affluent suburb.

Around 1840, the Murdoch family started a farm and nursery business in the part of Squirrel Hill North which is known today as Murdoch Farms. Today, this quiet area contains many upscale homes.

By the 1860s, the area along Fifth Avenue near Woodland Road had several mansions, including Willow Cottage. The cottage was built by the industrialist and civic leader Thomas M. Howe, a bank president and member of the U.S. House of Representatives from 1851 to 1855. Though neglected for many years and almost torn down, Willow Cottage has recently undergone a $2.2 million restoration and renovation into a Chatham University gatehouse and guesthouse.

On December 24, 1860, protests broke out in the streets of Squirrel Hill after news arrived that the U.S. Secretary of War, John B. Floyd had ordered 124 cannons to be shipped from Allegheny Arsenal to two forts under construction in Louisiana and Texas. The inhabitants of Pittsburgh predicted that these weapons would be used against them if the South seceded, and this did indeed happen at Fort Sumter. 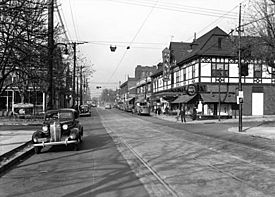 Murray Avenue in Squirrel Hill, looking north near Darlington Road, circa 1937. The electric trolley lines are clearly visible running down the center of the street.

Prior to 1868, the Squirrel Hill area was part of Peebles Township. This changed in 1868, when the area was annexed to the city of Pittsburgh.

Following the Civil War, several of Pittsburgh's richest families built multiple houses in the Woodland Road area between Fifth and Wilkins Avenues. In 1869, a women's college, the predecessor to Chatham University, was established nearby. Today, Chatham University owns several of these large houses.

In 1869, the clubhouse of the Pittsburgh Golf Club was built at the new Schenley Park Golf Course (The present building by Alden and Harlow was constructed in 1900). In 1876, the Homewood Cemetery was established on 176 acres (0.71 km2) of land in Squirrel Hill.

Over the course of the 19th century, the focus of Squirrel Hill shifted from its riverfront at the Monongahela River to the area closest to Oakland and Shadyside. Ebdy's orchard was located near Shady Avenue and Murdoch's farm, known for its flowers, fruit trees, and vegetable trees was located on the hill above Oakland. By the late 1800s, the building of trolley lines caused a migration of wealthy executives outwards toward country estates and workers inward toward trolley lines. Farms were sold, and divided for new housing developments. 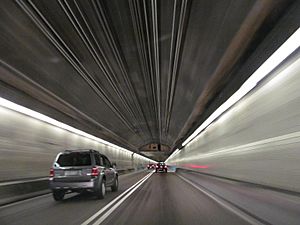 The growth of Squirrel Hill accelerated when an electric trolley was installed in 1893. The trolley line ran via Forbes Avenue and Murray Avenue, terminating in Homestead. The trolley line facilitated the building of hundreds of houses for the middle management of local factories, especially on Shady and Denniston Avenues near Aylesboro. Despite its trolley line, Murray Avenue remained a dirt road until 1920. Murray Avenue carried three Pittsburgh Railways trolley lines (#69 Squirrel Hill, #60 East Liberty-Homestead and #68 Homestead-Duquesne-Kennywood-McKeesport) until 1958 when the trolleys were replaced by buses. Bus routes 61A, 61B, 61C, 61D, 64, 67, and 69 pass through the area today.

Squirrel Hill grew even more with the opening of the Boulevard of the Allies in 1927, providing a direct link to downtown Pittsburgh. By the 1930s, most of the available land in Squirrel Hill had been filled.

In 1953, the Parkway and Squirrel Hill Tunnel were opened. They gave the area easier and quicker access from surrounding neighborhoods.

Squirrel Hill's business area along Forbes and Murray Avenues is referred to as "upstreet" (a contraction of "up the street") by locals. In addition to the many retail businesses in the neighborhood, there are a number of longtime, non-profit organizations, including a branch of the Carnegie Library of Pittsburgh; the Jewish Community Center of Greater Pittsburgh the Jewish Family & Children's Service of Pittsburgh; the Children's Institute of Pittsburgh; and the Squirrel Hill Urban Coalition. The Tango Café was a center of a range of cultural activities through the 2000s. Many annual events are hosted in Squirrel Hill by various community organizations. 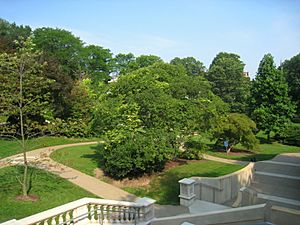 Chatham University Arboretum, located in the north of Squirrel Hill

In 1889, Schenley Park was established on land donated from Mary Schenley, whose grandfather had been the owner of considerable amounts of land in the area. The original size of the park was 120 acres (0.49 km2), though it eventually expanded to 456 acres (1.85 km2) over the years.

When Henry Clay Frick died in 1919, he bequeathed 150 acres (0.61 km2) of undeveloped land to the City of Pittsburgh for use as a public park. He provided a $2 million trust fund to assist with the maintenance of the park. Frick Park on the eastern border of the Squirrel Hill neighborhood opened in 1927. Between 1919 and 1942, money from the trust fund was used to enlarge the park, increasing its size to almost 600 acres (2.4 km2). In February 2004, Frick Park grew with the addition of the Nine Mile Run stream restoration area which flows to the Monongahela River. The United States Army Corps of Engineers managed the restoration funded with $5 million in federal money and $2.7 million raised by the city. The restoration was completed in 2006.

Squirrel Hill has had a large Jewish population since the 1920s, when Eastern European Jews began to move to the neighborhood in large numbers from Oakland and the Hill District. Many of them took up residence in rows of brick houses on the cross streets of Murray Avenue south of Forbes, such as Darlington Road, Bartlett Street, and Beacon Street. The neighborhood became the center of Jewish culture in the city, with kosher butcher shops, delicatessens, Jewish restaurants, bookstores, and designer boutiques. Several hundred Russian Jewish immigrants moved to the neighborhood in the 1990s. In more recent years, the community has begun to shift toward a more Orthodox bent, with many Conservative and Reform congregations shrinking as a result of emigration to Israel, secularization, population movement, and deaths.

Most of Squirrel Hill is surrounded by a consecrated wall (an "eruv" using telephone poles and wires as the "wall") which permits orthodox Jews to carry things like books and push strollers on the Sabbath.s boundaries all the way from the north end of the Hot Metal Bridge to the intersection of Wilkins and South Dallas in Point Breeze." Squirrel Hill contains three Jewish day schools: two are affiliated with the Chabad and Modern Orthodox movements, respectively, while Community Day School is a co-ed, independent Jewish day school in the neighborhood that attracts families across the wide spectrum of Jewish belief and practice. There are more than 20 synagogues. The Jewish Community Center (JCC) in Squirrel Hill is much like the YMCA in many other neighborhoods, providing services to all residents of Squirrel Hill while respecting the needs of the neighborhoods Orthodox members. The JCC has the only gym with an indoor pool in the neighborhood.

All content from Kiddle encyclopedia articles (including the article images and facts) can be freely used under Attribution-ShareAlike license, unless stated otherwise. Cite this article:
Squirrel Hill (Pittsburgh) Facts for Kids. Kiddle Encyclopedia.