The church, originally founded in 1869 for the Scottish Presbyterian community, was dedicated to St Andrew the Apostle, patron of Scotland. It was constructed in the then fashionable Neo Gothic style as laid out by architect Edmund Woodthorpe (1814-1887). It was consecrated in 1870. With the passage of time, the congregation declined and in circa 1960 it was decided to amalgamate it with a more active presbyterian parish elsewhere. The church authorities therefore sought to dispose of their asset to another Christian faith community. In 1961 the church was bought by the Polish Catholic Mission to the United Kingdom, with a mortgage, paid off in time with the help of donations and legacies from the faithful.

The church was re-dedicated in 1962, this time to another St Andrew in the Archdiocese of Westminster. Historically, it became only the second Catholic church to serve the capital's Polish community. The first Polish church in London was opened in Devonia Road, Islington, dedicated to Our Lady of Częstochowa and St Casimir. It became the first Polish-owned ecclesiastical building in the British Isles. It was consecrated on 30 October 1930 by cardinal August Hlond, primate of Poland in the presence of Cardinal Bourne of Westminster.

The Bobola congregation in West London was initially made up largely of people who had survived the trials of Siberia during and after World War II. It also served unofficially, as a Garrison Church for the thousands of Polish veterans, who had fought with the allies and were deprived of the right to return to their Polish homeland, surrendered to the USSR under the Yalta Agreement. From 1961 to 1979 pr. Kazimierz Sołowiej (1912–1979) was the parish priest. He took charge of the refurbishment of the building. Despite an "uneventful" exterior, the interior of the church was, according to Bridget Cherry, "daringly modernised" by émigré Polish craftsmen and artists under the direction of designer Aleksander Klecki. It contains many items inspired by Polish art and religious devotions.

To the left of the entrance is the Lady chapel dedicated to Our Lady of Kozielsk, whose original image in Poland was crowned by Pope John Paul II in 1997.

The church is considered a building of architectural heritage. It is listed with the Hammersmith and Fulham Historic Buildings Group. In 2008 the parish priest was presented with a prestigious conservation award for the Church from the Hammersmith Society.

The parish and the entire Polish community in West London were shocked and saddened to learn that the fourth parish priest of St Andrew's, Mgr. Bronisław Gostomski had died in the Smolensk air disaster on 10 April 2010. He had been aboard the ageing Polish Airforce Russian-built Tupolev Tu-154 aircraft carrying the delegation of many notable Poles intending to visit the Katyn site on the 70th anniversary of the Massacre, when the plane crashed near the Russian city of Smolensk. There were no survivors and the cause of the disaster remains unexplained. 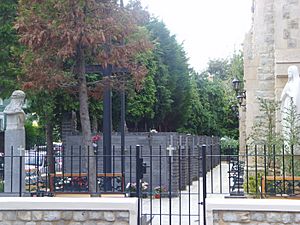 Garden of Remembrance to the side of St Andrew Bobola church

Because the authorities in Communist Poland would have forbidden any commemorations of Poland's struggle against the USSR, the only way to remember the fallen was to institute such memorials in the then Free World. Hence there are over 80 memorial plaques in the church building. The first to be installed on 24 November 1963 was a plaque designed by Stefan Jan Baran in honour of the Lwow Eaglets ("Orleta lwowskie"). On 12 April 1964 a plaque in honour of Gen. Walerian Czuma was unveiled. Other plaques commemorate the many Polish Army regiments which took part in the defence of Poland in several wars. They include:

On the ceremonial founding anniversary of the Polish Corps of Cadets, on 29 May 1983, memorials to their battalions were unveiled: Cadet Corps Numbers 1, 2 and 3.

On 23 April 1978 soil from the site of the Katyn massacre in Soviet-Russia was brought to the church and secreted inside its wall in commemoration of the 28,000 Polish Army Reserve officers of all faiths and members of the professions, who were murdered in 1940 on the orders of Stalin. The symbolic act was enabled through the offices of Cavalry officer, captain Zygmunt Godyń.

In the small garden of remembrance surrounding the church building is a columbarium, where the ashes of over 1300 deceased are kept. The initiative for a "crypt", to the left of the main entrance came from Maria Leśniak.

All content from Kiddle encyclopedia articles (including the article images and facts) can be freely used under Attribution-ShareAlike license, unless stated otherwise. Cite this article:
St Andrew Bobola Church, Hammersmith Facts for Kids. Kiddle Encyclopedia.