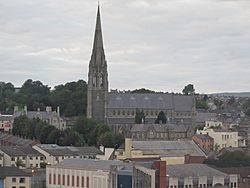 Money was raised not just in Derry and Ireland, but also in America where around £4,000 was raised. The architect commissioned to design the cathedral was James Joseph McCarthy who had already built numerous cathedrals across Ireland. The plan of the cathedral is a simple neo-Gothic expression.

The cathedral was officially opened on 4 May 1873 by the then Bishop of Derry, Francis Kelly. The project to build the cathedral's bell tower and spire was postponed, as no funds were available for the project. At first the cathedral's windows were made of plain glass due to lack of funds. It was not until the late 1890s when stained glass windows were installed. Work on the bell tower and spire began on 13 August 1900, with the building contract awarded to Courtney and Co from Belfast. Work was completed on 19 June 1903.

The changes to the Roman Catholic liturgy in 1962/1964 meant that the sanctuary of the cathedral had to be reorganised. In May 1964 a temporary wooden altar was placed in the sanctuary to accommodate the mass being said in English and facing the congregation.

In 1984 fundraising began for the renovation work to the cathedral, which its main structure was over a hundred years old and in desperate need of repair. From 1984 until 1988, exterior renovation work took place on the cathedral with the extension of the sacristy and building of a brand new conference room.

In June 1989 the cathedral was closed for six months for a permanent reorganisation of the sanctuary. The old temporary fittings were removed and a new sanctuary floor made from Sardinian granite was completed. A new square altar made from Carrara marble was made and installed in the sanctuary under the chancel arch.

The old pulpit was taken out and a brand new lectern made of marble was installed. The celebrant's chair and tabernacle stand were all made from Carrara and Macedonian marble. A new tabernacle was made in silver-plated bronze, and was constructed by a Kilkenny silversmith, Peter Donovan.

A new secondary porch was created in the main entrance in the 1989 renovations along with a new small porch in the North aisle. The main high altar table was taken out, however the original reredos which was installed in 1904, was kept.

A new lighting scheme was installed, to give the cathedral more brightness and warmth which it had lacked for many years. A new sound system was also installed which gave the cathedral excellent amplification. The whole interior of the cathedral was redecorated.

The cathedral's brand new interior was opened and consecrated by the then Bishop of Derry, Edward Daly on 17 December 1989.

"As custodians of this sacred, listed building of St Eugene’s Cathedral, it has become necessary to carry out essential repairs and refurbishment primarily associated with damage caused by the entrance of moisture to the fabric of the building. This is affecting internal finishes, stained glass windows and external masonry (ie St Columba’s and St Patrick’s windows). The damp entering the aisle wall at the choir is causing large sections of internal plaster to boast. The spiral staircase to the bell tower is cracked and unsafe. The existing wrought iron ladder and platform to the spire from the bell tower is unsafe and as a result the spire parapet gutter has not been maintained for several years. The works will cost £353,480. The works will begin on Monday, 25th May and will continue for 20 weeks. The main contractor is Stewart & McConnell, Derry (lowest tender)".

On the week of 16 November 2015, restoration work on the cathedral concluded.

On Sunday 13 December 2015, the bishop of Derry, Donal McKeown, opened a "Holy Door" in the cathedral to commence the extraordinary Jubilee Year of Mercy in the Roman Catholic Church, which will run until Sunday 20 November 2016. The "Holy Door" is the main entrance door to the cathedral. The entrance porch has been completely refurbished. On entering the porch you are now greeted by eight newly positioned oak statues of Saints Columba, Patrick, Matthew, Mark, Luke, John, Mary and Joseph. These statues used to be part of the canopy of the old pulpit in the cathedral from 1906 to 1989.

A stone statue of Saint Eugene adorns the outside of the entrance porch embedded in the main bell tower of the cathedral; it has been there since the cathedral was built in 1873. In the newly refurbished porch the words from the prophet Isaiah, "Do not be afraid I have redeemed you and called you by your name. You are mine", are engraved in the wall. On Sunday 13 November 2016, Bishop Donal McKeown officially closed the "Holy Door" to mark the end of the Jubilee Year of Mercy which concluded on Sunday 20 November 2016 in the Roman Catholic Church.

On Monday 8 August 2016 the retired bishop of Derry Edward Daly died at the age of 82. His remains were brought to the cathedral that evening, and over a period of two and a half days an estimated 25,000 people came to pay their last respects to Bishop Daly's remains which laid at rest inside the cathedral on public display. His funeral mass took place in the cathedral on Thursday 11 August 2016, where over a thousand people packed into the cathedral. Irish President Michael D Higgins, Deputy First Minister Martin McGuinness and representatives of the Queen, the British and Irish governments and City of Derry dignitaries, including Deputy Mayor Jim McKeever, were also present. The sitting mayor alderman Hillary McClintock from the DUP didn't attend the funeral due to unforeseen circumstances. But paid tribute to Bishop Daly by article and opened a book of condolences in the Guildhall.

The current bishop of Derry, Most Reverend Donal McKeown, was the celebrant of the Requiem Mass, which was concelebrated by the Primate of All Ireland, Derry-born Archbishop Eamon Martin, retired archbishop of Armagh Sean Brady, other bishops and clergy from across the Derry Diocese and around Ireland. Representatives of the other Christian churches in Derry City, including former Church of Ireland Bishop of Derry and Raphoe – James Mehaffey, who was very close friends with Bishop Daly – attended.

Immediately after the Requiem Mass, Bishop Daly was buried in a plot located within the grounds of the cathedral alongside his predecessor Bishop Neil Farren, Bishop of Derry from 1939 to 1973, who was buried there in 1980.

The area which was the old confessional rooms since 1989 were converted into a new side chapel dedicated to Saint Mother Teresa of Calcutta. The new chapel was blessed and dedicated by the Bishop of Derry, Donal McKeown, during the cathedral parish's annual nine day Novena to Saint Therese of Lisuex. On Friday 12 May 2017 at a special prayer service at 7:30 pm in the cathedral, parishioners and clergy were joined by nuns from Mother Teresa's order, who joined the packed congregation in the cathedral for Evening Prayer and a special dedication ceremony for the new chapel. Today the chapel is used by prayer groups, and it is also used for daily Eucharistic Adoration from 8:30 am – 10:00 am Mondays to Fridays.

The organ has always been located in a west end gallery. The original organ was built by Telford of Dublin and installed in 1873. In the mid 1950s this instrument was replaced with an 11 rank extension organ by the John Compton Organ company of London. Only for the cathedral's extremely lively acoustic, the instrument is of questionable musical quality. No pipes are visible, which detracts greatly from the overall appearance of the West end. The fine stone carved gallery and rose window above, are marred by what looks more like a loudspeaker cabinet than an organ. By the late 1990s this organ had fallen into only sporadic use, with the main Sunday services being accompanied by a Johannus electronic instrument located in the south aisle.

Saint Eugene's Cathedral forms part of the Parish of Templemore in the city of Derry, which also includes Saint Columba's Church, Long Tower.

The Bishop of Derry – Most Reverend Donal McKeown is the Parish Priest of the Templemore Parish. Bishop McKeown was installed as Bishop of Derry in the cathedral on Sunday 6 April 2014.

The bells of the cathedral can be heard over the Derry area each day at 8:00am, 12:00pm, 6:00pm and 9:00pm, ringing out seasonal tunes and calling parishioners to masses.

As of November 2019, the cathedral parish covers a Catholic population of 10,520.

As of November 2019, Saint Eugene's Cathedral is served by the following clergy:

As of November 2019, Saint Eugene's Cathedral timetable is outlined below:

Full details of all Mass times, confessions, and special ceremonies including extra services for Advent, Christmas, Lent and Easter are available on the cathedral parish website – www.steugenescathedral.com

All content from Kiddle encyclopedia articles (including the article images and facts) can be freely used under Attribution-ShareAlike license, unless stated otherwise. Cite this article:
St Eugene's Cathedral Facts for Kids. Kiddle Encyclopedia.