St Margaret's Church is an ancient Anglican parish church situated on St Margaret's Way in Leicester, England. It is a Grade I listed building.

Parts of the transept date from c. 1200, and parts of the aisles from the late 13th century. Most of the church was rebuilt in Perpendicular style c. 1444, under William Alnwick, the Bishop of Lincoln. The west tower, which is 108 feet (33 m) high, was built at that time. It contains a ring of 14 bells including a flat sixth. There was a Victorian restoration by George Gilbert Scott in 1860, and another in 1881 by George Edmund Street.

The church contains stained glass by Thomas Willement dating from the 1840s, and William Wailes of 1864.

The alabaster effigy of John Penny dates from 1520, although his original tomb was replaced in 1846. He was the abbot of Leicester Abbey from 1496 to 1509, and subsequently Bishop of Carlisle. 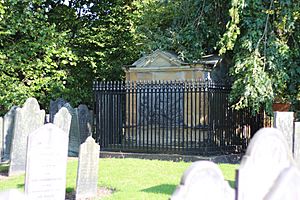 Rollo's tomb in the churchyard

The organ dates from 1773 but is now much enlarged. A specification of the organ can be found on the National Pipe Organ Register.

All content from Kiddle encyclopedia articles (including the article images and facts) can be freely used under Attribution-ShareAlike license, unless stated otherwise. Cite this article:
St Margaret's Church, Leicester Facts for Kids. Kiddle Encyclopedia.