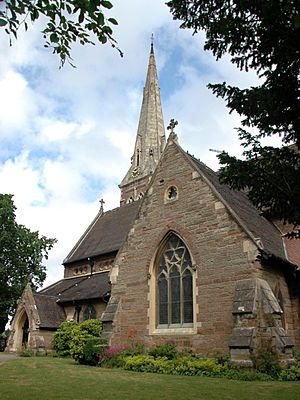 St Mary's from the southeast, showing the south transept

The church is set back from the main Bristol Road (A38 road) and is approached from the south by a drive, ending at a lychgate at the entrance to the churchyard. There is also an entrance from the north in Lodge Hill Road.

The architect Edward Holmes designed the building in a Gothic Revival interpretation of Decorated Gothic. It is built of coursed sandstone, enlivened both inside and out by being laid in courses of two different shades. The walls are of brick, faced externally with Bromsgrove stone, with Bath stone used for the tracery, dressings and spire. The nave, chancel and aisle arches and columns are executed in Bath stone, the arches having Weoley Castle stone voussoirs introduced alternately with Bath stone. Bands of Weoley Castle stone run horizontally around the inside of the church. The chancel roof was decorated with flowers in gold and colours, painted on a blue ground between the rafters. The north-west tower has a broach spire 150 feet (46 m) high, topped by a weathercock.

The church is cruciform, and the nave has a clerestory and north and south aisles with four-bay arcades. The clerestory windows are slightly unusual, being quatrefoils set in groups of three. Internally the walls are plastered, and the plastering is punctuated by horizontal bands of sandstone. In the transepts and nave the roof timbers are exposed and in the chancel they are gilded and painted in heraldic colours of red, blue, green, white and gold.

The parish of St Stephen, Selly Park was formed from part of St. Mary's parish in 1871. The parishes were in the Anglican Diocese of Worcester until 1905, when they became part of the newly created Anglican Diocese of Birmingham. In 1893 a mission church was established and in 1906 a new church of St Wulstan's Church, Selly Oak was built. A parish was formed out of St Mary's for this new church in 1911.

For St Mary's centenary in 1961 the interior was reordered and redecorated under the direction of the architect Stephen Dykes Bower. At the same time painted, sculpted rood was removed from the chancel arch and transferred to Holy Trinity parish church, Hadley, Shropshire.

Since 1982 the building has been Grade II listed In the 1980s a set of olive wood Stations of the Cross was installed. 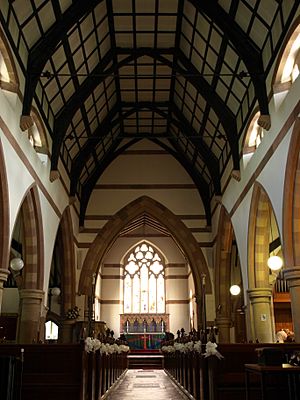 Looking east along the nave to the chancel

There are nine stained-glass windows by Hardman & Co.. 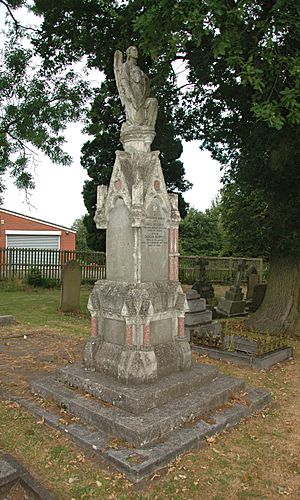 Grave and Gothic Revival monument in St Mary's churchyard of Joel and Dorcas Merrett, who died within a month of each other in 1893. Joel Merrett paid for the treble bell in the tower

In 1922 the bells were found to be unsafe to ring, and they were silent for a decade until enough money was raised for rectification work. In 1932 Gillett & Johnston of Croydon re-founded all eight bells and they were re-hung. The tenor (the largest bell) now weighs 12 long cwt 1 qr 17 lb (1,389 lb or 630 kg) in and is tuned to the musical note G.

The Master of the Ringers for many years from the 1930s was William B. Cartwright, a local solicitor.

Two of the bells are inscribed. 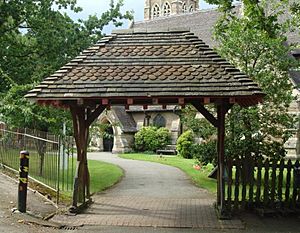 Lychgate to the churchyard

In 2015 the organist is still John stormont

The Organist is also choirmaster and a robed choir leads the worship at the principal Sunday services. Other choral occasions include the Christmas Festival of Lessons and Carols, and a passion cantata, such as Stainer's Crucifixion, in Holy Week. There are also occasional organ recitals and concerts. 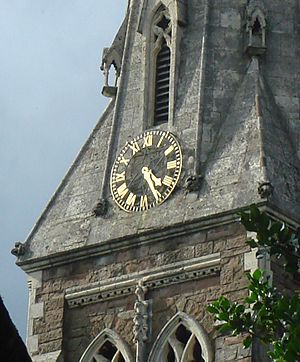 Clock on the steeple

St Mary's has a tower clock that chimes the hours and quarter hours. It was installed in 1887, the year of the Golden Jubilee of Queen Victoria. JB Joyce & Co of Whitchurch, Shropshire made the clock under the supervision of the Rev. Canon Cattley. It is made on the same principle as the clock designed by Edmund Beckett, 1st Baron Grimthorpe for the great clock at Westminster and the large clock at Worcester Cathedral. The cost was about £331 (equivalent to £30,000 in 2018),2018 and was the gift of the widow and family of the late Benjamin Walters.

The frame is cast iron, horizontal and planed. It is 6 feet (1.8 m) long, 1 foot 9 inches (0.5 m) wide and 1 foot (0.3 m) deep, and is supported by beams that are built into the tower wall to preclude vibration. The wheels are of gunmetal and the pendulum beats every 1¼ seconds.

All content from Kiddle encyclopedia articles (including the article images and facts) can be freely used under Attribution-ShareAlike license, unless stated otherwise. Cite this article:
St Mary's Church, Selly Oak Facts for Kids. Kiddle Encyclopedia.