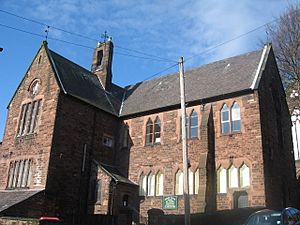 St Mary's Church is in Church Road, Woolton, Liverpool, Merseyside, England. It is an active Roman Catholic parish church in the Pastoral Area of Woolton and Halewood, and the Archdiocese of Liverpool The church is recorded in the National Heritage List for England as a designated Grade II listed building.

History of the Catholic Mission in Woolton

A Catholic Community has been present for over 300 years. It has been a very varied and interesting History. Notable dates include:

Priests who have served at Saint Mary's 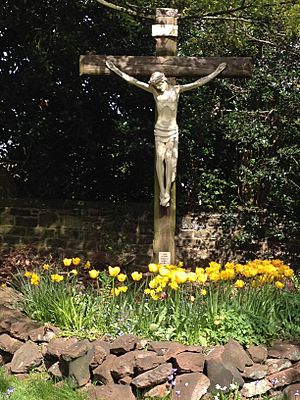 Calvery situated in the church grounds, some stones from the old priory can be found at its base.

Assistant priests during the above years

In 1928 the Benedictines then departed after two centuries of service 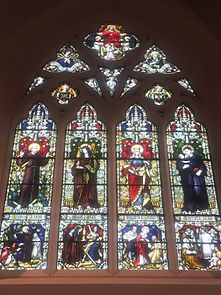 Stained glass depicting various saints and episodes from their lives.

As Fr. Pat O’Brien's retirement approached, the Congregation of the Most Holy Redeemer better known as the Redemptorists were asked by Archbishop Patrick Kelly to take over the Pastoral Care of St. Mary's. This would be in addition to their parish of Our Lady of the Annunciation of Bishop Eton. The Parishes would not be merged but would continue to exist in their own right.

St Mary's is constructed in red sandstone and has a slate roof. It is orientated with the ritual east facing the northwest. The plan consists of a five-bay nave with a north porch but without aisles, large north and south transepts, a chancel with north and south chapels and sacristies. There is no tower. At the west end are diagonal buttresses, an entrance, and pointed windows containing Geometric tracery. The windows along the sides of the nave have two lights. In the south transept is a four-light window, and the north transept contains two two-light windows with a rose window above. In the chapel is a five-light window flanked by diagonal buttresses. The chapels are gabled with two-light windows. The south sacristy has one and two lights, with a rose window in the gable. 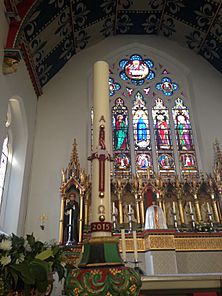 Paschal Candle 2015 and view of the stained glass behind the main altar.

Inside the church, the high altar and reredos date from 1865, and were probably designed by E. W. Pugin. They were separated in 1948–50 by Weightman and Bullen, who placed the reredos against the east wall. The stained glass in the east window dates from 1878, and is a typical design by the Belgian stained glass painter Jean-Baptiste Capronnier. The two-manual pipe organ was built by Franklin Lloyd in 1895, and is situated in a gallery on the north wall of the church at the west end. 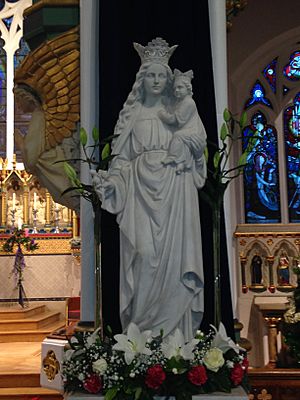 Statue of Mary, Mother of God

The presbytery was built in 1864, and designed by E. W. Pugin. It is constructed in stone, and has a slate roof. The presbytery has two storeys and a front of three bays, the outer bays projecting under gables. In the centre bay is a gablet, and the third bay contains a single-storey canted bay window. The presbytery is connected on the left by a single-storey corridor with a central gabled entrance and a ridge dormer. It is designated as a Grade II listed building.

The school was built in 1869, with its entrance in Mount Street. It is constructed in red sandstone with a slate roof. The school is in two storeys and has a nine-bay front, the central bay projecting forward under a gable. The windows in the ground floor have three lights under ogee heads; those in the upper floor have two lights under cusped heads. In the gable of the projecting wing is a rose window. The school is also listed at Grade II. The school building is now used at the Parish Hall and the ground floor is a Nursery.

All content from Kiddle encyclopedia articles (including the article images and facts) can be freely used under Attribution-ShareAlike license, unless stated otherwise. Cite this article:
St Mary's Church, Woolton Facts for Kids. Kiddle Encyclopedia.