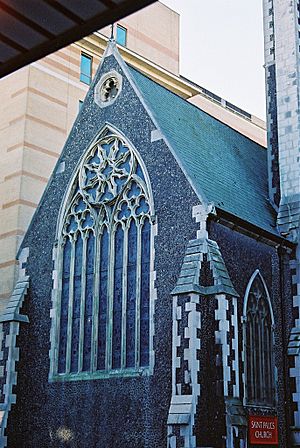 The eastern end of the church 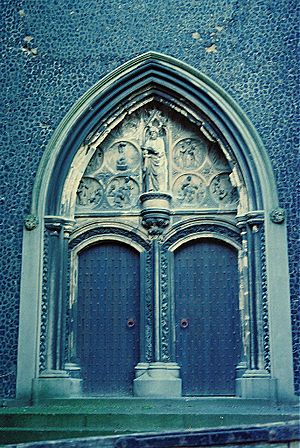 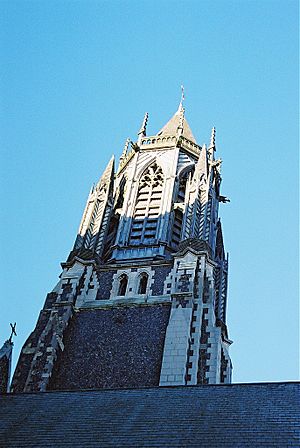 The tower from the south

St Paul's Church, dedicated to the missionary and Apostle to the Gentiles Paul of Tarsus, is a Church of England parish church in Brighton in the English county of Sussex. It is located on West Street in the city centre, close to the seafront and the main shopping areas.

The church was the fourth to have been built on the instruction of Rev. Henry Michell Wagner, Vicar of Brighton since 1824. His first was All Souls on Eastern Road, built between 1833 and 1834 but demolished in 1968. This was followed by Christ Church on Montpelier Road in Montpelier, near the boundary with Hove, to which King William IV, his Queen Consort Adelaide and his successor Queen Victoria had each contributed £50 towards the £4,500 cost of construction. This church was demolished in 1982. His third was the church of St John the Evangelist in Carlton Hill, on the edge of the Kemptown district. This church, which had again received a £50 donation from Queen Victoria, was consecrated in 1840, and became the Greek Orthodox Church of the Holy Trinity after it closed in 1980. St. Paul's is therefore the earliest of Rev. Wagner's churches to remain in use as a place of Anglican worship.

The site of the church had been occupied since 1830 by a small chapel for the use of fishermen. At that time, many of the town's fishermen lived in poor housing on streets surrounding Russell Street (an area now hidden under the rear of the Churchill Square shopping centre). In 1846, Rev. Wagner bought the chapel and some surrounding buildings for £3,000, cleared the site and appointed a builder and a designer.

Brighton-based builders Cheesman & Son, as they were known at the time, were chosen to construct the building to a design by R. C. Carpenter: they had worked with Rev. Wagner since 1834, when they built a vicarage for him, and were responsible for both Christ Church and the church of St. John the Evangelist. However, Rev. Wagner's intention had always been for the church to be his son Arthur's first ministry following his ordination, and Arthur asked for the design work to be undertaken by a separate designer. Arthur Wagner was 22 years old at the time the land was purchased, and was preparing to be ordained (this took place in 1850). He was a follower of the Oxford Movement (or Tractarian Movement), whose favoured architectural style at the time was a revival of the 14th century aspects of Gothic architecture (see also here).

The exterior of the church consists of knapped flint dressed with Caen stone, a type of limestone also used on the Tower of London. Inside, as well as a nave and chancel, there are two vestries, an organ chamber and a small "crypt chapel" dug into sloping ground. This subsequently became a library. One of the vestries was originally built as a reading-room; it is now known as the "Fishermen's Vestry".

Opening of the church

St Paul's church opened to the public on 18 October 1848 after approximately two years of building works. The cost of £12,000 was met by a combination of grants from various bodies and societies, public donations, Henry Wagner himself (£1,475) and other members of his family (£1,263). At the time, the practice of pew rental was still common, and although Arthur Wagner wanted his church to have free seating for all, his father Henry insisted that 460 of the 1,200 seats should be reserved for rental. (The first church in Brighton to be free throughout from the time it opened was St Bartholomew's Church, for which Arthur Wagner had the sole responsibility after it opened in 1874.)

The consecration took place on 23 October 1849, and Arthur Wagner assumed responsibility for the church in 1850 when his father presented its curacy to him in perpetuity. Rev. Arthur Wagner, as he was now titled, therefore held the position of vicar until his death in 1902 at the age of 77. 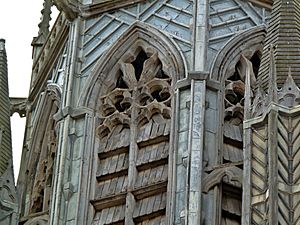 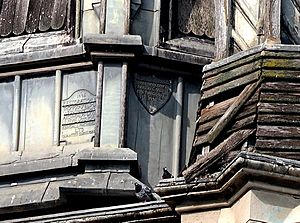 The church is a Grade II* listed building, meaning it is a "particularly significant building of more than local interest". As of February 2001, it was one of 70 Grade II*-listed buildings and structures, and 1,218 listed buildings of all grades, in the city of Brighton and Hove. Services are held each Sunday at 11.00am (Solemn Mass), and there is a Daily Mass at 11.30am.

All content from Kiddle encyclopedia articles (including the article images and facts) can be freely used under Attribution-ShareAlike license, unless stated otherwise. Cite this article:
St Paul's Church, Brighton Facts for Kids. Kiddle Encyclopedia.