St Wystan's Church is a Church of England parish church in Repton, Derbyshire that is famous for its Anglo-Saxon crypt which is the burial place of two Mercian kings. The church is recorded in the National Heritage List for England as a designated Grade I listed building, and is dedicated to the Anglo-Saxon Saint Wystan (or Wigstan), who was formerly buried within the church's crypt.

The Anglo-Saxon abbey church was cruciform and may have had a tower over its central crossing. The nave of the current church has Medieval Gothic north and south aisles that were rebuilt in the 13th century and widened early in the 14th century. The west tower and recessed spire were added in 1340. The top of the spire is 212 feet (65 m) above ground level. In the 15th century the nave clerestory with its timber roof and the two-storey porch were built and the tower windows were altered. Monuments inside the church include an alabaster effigy of a knight from about 1400 and monuments to members of the Thacker family from 1563 and 1710. The tower has a ring of eight bells, the oldest of which was cast at Leicester in about 1500.

The church was restored between 1885 and 1886 by Arthur Blomfield. 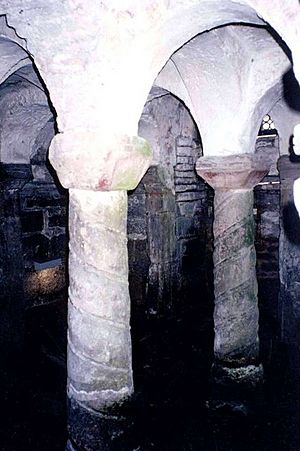 The crypt was constructed in the early 8th century; it was built over a spring and is thought to have originally been a baptistery.

It was converted into a mausoleum for King Æthelbald of Mercia, during his lifetime. King Wiglaf and his grandson Saint Wigstan (after whom the later church is named), were also buried in the crypt.

It is thought that the royal bodies were first buried in the ground to decompose before their bones were interred in the crypt.

Following Saint Wigstan's burial, the crypt became a place of pilgrimage. However, following the Danish (Viking) invasion, St Wigstan's body was removed and taken with the fleeing monks. It was later returned but King Cnut had St Wigstan's remains removed again in the 10th century; having them reburied at Evesham Abbey in Worcestershire.

Nikolaus Pevsner described the Anglo-Saxon parts of St Wystan's parish church as "one of the most precious survivals of Anglo-Saxon architecture in England". In addition to the crypt they include the chancel, the northeast and southeast parts of the crossing and part of the north transept. The crypt is a square chamber with a roof of three rows of three domical vaults supported by two pilasters on each wall and four free-standing pillars at the four corners of the central vault.

In the 1980s, a mass grave thought to be associated with the Great Danish Army was found in a mound, constructed over the remains of a Saxon chapel, to the west of St Wystan's Church in Repton by archaeologists Martin Biddle and Birthe Kjølbye-Biddle and their team. It contained roughly 300 sets of human remains, about 20% of them women. The remaining 80% were from men aged 18 to 45. Many of them showed signs of violent injury, and a variety of Viking artefacts, such as a Thor pendant, were found among the bones. Although initial radiocarbon dating suggested that the bodies had accumulated there over several centuries, in February 2018, a team from the University of Bristol announced that the remains could indeed all be dated to the late 800s AD, consistent with the time the army wintered in Derbyshire. They attributed the initial discrepancies to the marine reservoir effect from the high consumption of seafood by the Vikings.

Outside the crypt, the 'Repton Stone' was found in 1979. This is interpreted as an upper section of a standing cross with, on one face, a carving of a mounted figure. The figure is of a man wearing mail armour and brandishing a sword and shield, with a diadem around his head. The mounted figure has been identified as King Æthelbald of Mercia. In 757, Æthelbald was killed at Seckington, Warwickshire, near the royal seat of Tamworth and buried at Repton. If this is Æthelbald, it would make it the earliest large-scale pictorial representation of an English monarch. The Repton Stone is displayed in Derby Museum and Art Gallery. 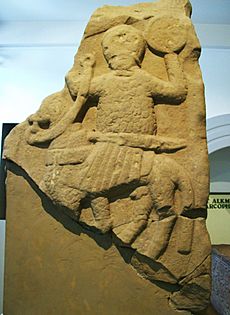 The churchyard contains the war graves of 17 Commonwealth service personnel (mostly Royal Air Force of World War II). Also buried there are the ashes of C. B. Fry, whose tombstone, dedicated in 2008, describes him as "Cricketer, Scholar, Athlete, Author – The Ultimate All Rounder".

The church contains a two manual 23-stop tracker action pipe organ by Peter Collins dating from 1998. The specification can be found at the National Pipe Organ Register.

All content from Kiddle encyclopedia articles (including the article images and facts) can be freely used under Attribution-ShareAlike license, unless stated otherwise. Cite this article:
St Wystan's Church, Repton Facts for Kids. Kiddle Encyclopedia.