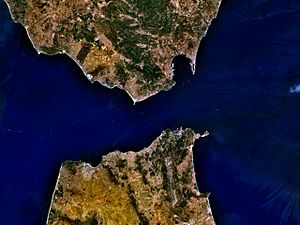 The Strait of Gibraltar

The Strait of Gibraltar crossing is a hypothetical bridge or tunnel spanning the Strait of Gibraltar (about 14 km or 9 miles at its narrowest point) that would connect Europe and Africa. The governments of Spain and Morocco appointed a joint committee to investigate the feasibility of linking the two continents in 1979, which resulted in the much broader Euromed Transport project.

In January 2021, it was reported that the United Kingdom and Morocco would discuss building the crossing between Gibraltar and Tangiers.

Looking South from Mirador del Estrecho overlook in Spain overlooking the Strait of Gibraltar. Pictured to the left is Ceuta and to the right (out of the picture) is Tangier.

Several engineers have designed bridges on various alignments and with differing structural configurations. A proposal by Professor T.Y. Lin for a crossing between Point Oliveros and Point Cires featured deep piers, a length of 14 kilometres (9 miles), 910-metre-tall (3,000 ft) towers, and a 5,000-metre (16,000-foot) span, more than twice the length of the current longest bridge span. A 2004 proposal by architect Eugene Tsui was for a floating and submerged bridge connected at a three-mile wide island in the middle of the Mediterranean Sea.

Various tunnels have been proposed. Spain first proposed a modern tunnel under the Strait of Gibraltar in 1930. A major problem arose when the engineers hired by the Spanish government discovered that the material under the Strait was extremely hard rock, making tunnelling impossible with the available technology. One engineering solution was to fix, using cables, a prefabricated concrete tunnel to the floor of the Strait. This tunnel would handle automotive and train traffic.

The Strait depth extends to 900 metres (3,000 ft) on the shortest route, although it is only about 300 metres deep slightly further west, in a region known as the Camarinal Sill; the European and African tectonic plates meet around this area. The shortest crossing is 14 kilometres (8.7 mi). The proposed route of 23 kilometres (14 mi) is west of Tarifa and to the east of Tangier. The tunnel is likely to be about 34 kilometres (21 miles) in all. It is proposed that a connection would have to be made to the Spanish high speed railway network, which has a line projected to be built from Cádiz to Málaga via Algeciras.

A report on the feasibility of the tunnel was presented to the EU in 2009. A further project study is under development by a group of specialist consultants from SYSTRA, Amberg and COWI. 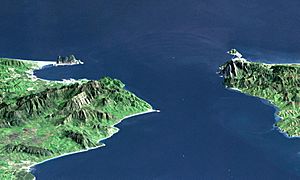 Looking east over the Strait of Gibraltar, with the Rif (south) on the right and Andalusia (north) on the left

The political origins of the project arise from the Common Hispanic-Moroccan Declaration of Fez, of 16 June 1979, and signed by the kings of Spain and Morocco. One consequence of the declaration was the creation in 1981 (40 years ago) (1981) of SECEGSA, the Spanish government-funded corporation whose job is to "study" and "promote" the crossing.

In December 2003, Spain and Morocco agreed to explore the construction of an underwater rail tunnel to connect their rail systems. The tunnel would have linked Cape Malabata near Tangier with Punta Paloma in the El Estrecho Natural Park 40 kilometres (25 mi) west of Gibraltar. In late 2006, Lombardi Engineering Ltd, a Swiss engineering and design company, was retained to draft a design for a railway tunnel. According to the company, the main differences between the construction of this tunnel and that of the Channel Tunnel, linking France and Great Britain, are the depth of the sea and the geological conditions. The area under the Strait is less stable than that under the English Channel. An active major geologic fault, the Azores–Gibraltar Transform Fault, bisects the Strait, and severe earthquakes have occurred in the area. The presence of two deep Quaternary clay channels in the middle of the Strait makes construction complex, causing doubts about the feasibility of the project and proposals for an exploratory tunnel.

No official figures about the cost of the project had been announced by 2007, but previous estimates exceeded €5 billion.

The proposed rail tunnel's length is 40 kilometres (25 mi), 300 metres (980 ft) deep, and its construction would take 15 years. An earlier plan was to link the two continents via the narrowest part of the strait, but this idea was dismissed as the tunnel would be 900 metres (3,000 ft) below sea level. For comparison, the currently deepest undersea tunnel, the Norwegian Ryfylke Tunnel, is 291 metres (955 ft) below sea level. A tunnel deeper than Ryfylke is under construction, also in Norway; Rogfast will be 27 kilometres (17 mi) long and 392 metres (1,286 ft) deep, expected to be completed in 2028–29.

The construction of terminals, such as the Eurotunnel Folkestone Terminal and Eurotunnel Calais Terminal at either end of the Channel Tunnel, might be required for trans-shipment of road vehicles.

All content from Kiddle encyclopedia articles (including the article images and facts) can be freely used under Attribution-ShareAlike license, unless stated otherwise. Cite this article:
Strait of Gibraltar crossing Facts for Kids. Kiddle Encyclopedia.