Sule Skerry is a remote skerry in the North Atlantic off the north coast of Scotland.

Sule Skerry together with Sule Stack are listed as a Special Protection Area as they are home during the breeding season to thousands of puffins and gannets and smaller numbers of the rarer Leach's storm petrel and storm petrels. Note that Leach's petrel visit the island but breeding is not proved. Since the first visiting birds in 2003 there is now a large breeding population of gannets; a possible overflow from nearby Sule Stack.

Every three years the puffins and other seabirds on Sule Skerry are monitored by a team of birders called the Sule Skerry Ringing Group. They have been monitoring the seabirds on the island since 1975.

The island is treeless, since few trees would withstand the high winds of winter and salt spray environment. The dominant plant is maritime mayweed (Tripleurospermum maritimum).

Sule Skerry with lighthouse from the south (drawing) 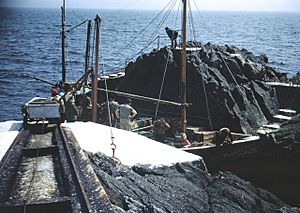 There is a lighthouse at the centre high point of the island and a number of small cairns around the periphery. According to the Guinness Book of Records, the Sule Skerry lighthouse was the most remote manned lighthouse in Great Britain from its opening in 1895 to its automation in 1982. Its remote location meant that construction could only take place during the summer, thus it took from 1892–94 to complete.

A meteorological buoy used in Met Office's Marine Automatic Weather Station (MAWS) Network is located off Sule Skerry. Results from the buoy are used in the Shipping Forecast.

"The Great Silkie of Sule Skerry" is a story of a Silkie who lives on Sule Skerry.

All content from Kiddle encyclopedia articles (including the article images and facts) can be freely used under Attribution-ShareAlike license, unless stated otherwise. Cite this article:
Sule Skerry Facts for Kids. Kiddle Encyclopedia.