Sunnyside is a city in Yakima County, Washington, United States. As of the 2010 census the population was 15,858. 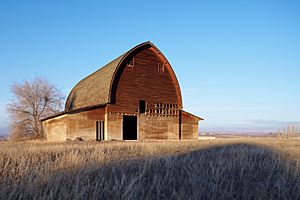 On September 16, 1902, residents voted 42 to one to incorporate as the town of Sunnyside. By state law a town needed to have 300 citizens in order to legally incorporate. With 314 residents, Sunnyside was just eligible to legally vote for incorporation.

The first mayor of Sunnyside was the town druggist James Henderson.

The settlement was founded by Walter Granger in 1893. The name "Sunnyside" was coined by a merchant named W. H. Cline. Granger was involved in the financing and construction of the Sunnyside Canal which would allow Yakima River water to irrigate the area. However, due to the Panic of 1893, Granger's creditors foreclosed on the canal, and the town's population dwindled to seven families. However, by the end of 1901, the population had doubled, finally exceeding 300 people. The townsite contained "1 bank, 11 stores, 3 hotels, 1 newspaper, 2 blacksmith shops, 2 livery barns, 3 churches, and a large and growing school."

Sunnyside's population increase at this time was stimulated by the immigration of the Dunkards from South Dakota who were moving to the town. The population of Dunkards was of such notable size that by 1902 it was noted that they had "built a commodious place of worship at Sunnyside" which was the largest church in Yakima County at the time.

The Dunkards, members of the German Baptist Progressive Brethren, relocated to Sunnyside in order to form what they called the Christian Cooperative Colony. The Brethren bought the entire town site and were the developers of its first bank, and a telephone system. They enforced clauses prohibiting alcohol, dancing, and gambling as a condition on every parcel of land sold. Because of this, old maps of Washington identify the town with a cross or halo symbol.

Later, in the 1930s, refugees from the Dust Bowl also moved to Sunnyside.

Under the leadership of mayor William Bright "Billy" Cloud (1870–1959), Sunnyside initiated a project to pave its dirt streets on June 5, 1917. This project was necessary since years of irrigation had raised the water table to the point that the streets had become unbearably muddy. The cost of the entire project was $62,629.45.

In 1948, Sunnyside became the first city in the State of Washington to adopt the Council-manager plan of government (see RCW 35A.13). This plan provides for an elected city council which is responsible for policy making, and a professional city manager, appointed by the council, who is responsible for administration. The city manager provides policy advice, directs the daily operations of city government, handles personnel functions (including the power to appoint and remove employees) and is responsible for preparing the city budget. Under the council-manager statutes, the city council is prohibited from interfering with the manager's administration. The city manager; however, is directly accountable to and can be removed by a majority vote of the council at any time.

Sunnyside was awarded the distinction of being an All-America City in 1979. 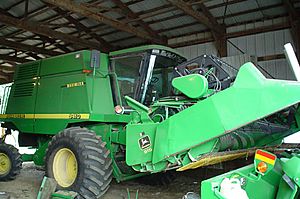 A 9410 John Deere Combine harvester typical of a parade entrant. 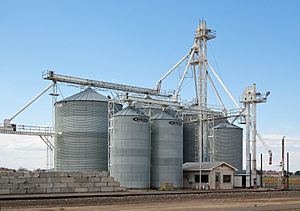 First held in 1989, the 'Lighted Farm Implement Parade has been called "the NW's premier lighted parade." Usually taking place in early December, the parade includes "farm implements: combines, boom trucks, sprayers, swathers, grape pickers, and all types of tractors" decorated with colorful lights. The 2006 edition of the event had more than 70 parade entrants. The A&E network once named the event one of the "Top 10" such parades in the United States. The parade was the first of its kind in the Yakima Valley.

The Darigold Dairy Fair manufactures cheese, (150 million pounds of cheese annually) but was mostly noted for its colorful facade and circus-like decorations, which included a pair of cows swinging on a flying trapeze. The Dairy Fair Store was shut down in 2012.

Located downtown, the museum houses and displays artifacts and documents with a focus on daily life in Sunnyside during its early years. The building housing the museum was donated to the city by Robert and Martha McIntosh, who had purchased the business from the family of Walter C. Ball & Sons, the local undertaking business. Both were also among the pioneering families that founded Sunnyside. The Sunnyside Memorial Cemetery, founded by the Ball Family, is located north of town. The lone structure at that location was designed by Percy Ball to resemble Chingford Church in Walthamstow, England where Walter C. Ball and his wife Amelia grew up together. This building was used to house the retort for cremations until it fell into disrepair. The family plots of the Ball family are located on the east side of the structure.

Sunnyside has one public library. The original public library, a Carnegie Library, was built in 1911. It was replaced in 1964 with the current library building. It is the second largest library in the Yakima Valley Regional Library System and has one of the largest Spanish language collections in the system.

Sunnyside lies approximately 180 miles away from Seattle to the west, Spokane to the east, and Portland to the southwest.

There were 4,332 households of which 57.8% had children under the age of 18 living with them, 49.6% were married couples living together, 21.1% had a female householder with no husband present, 8.4% had a male householder with no wife present, and 20.9% were non-families. 17.0% of all households were made up of individuals and 8.6% had someone living alone who was 65 years of age or older. The average household size was 3.60 and the average family size was 4.02.

There were 3,827 households out of which 50.2% had children under the age of 18 living with them, 55.1% were married couples living together, 16.6% had a female householder with no husband present, and 21.6% were non-families. 18.6% of all households were made up of individuals and 11.0% had someone living alone who was 65 years of age or older. The average household size was 3.58 and the average family size was 4.02.

Sunnyside has a cold desert climate (BWk) according to the Köppen climate classification system.

All content from Kiddle encyclopedia articles (including the article images and facts) can be freely used under Attribution-ShareAlike license, unless stated otherwise. Cite this article:
Sunnyside, Washington Facts for Kids. Kiddle Encyclopedia.