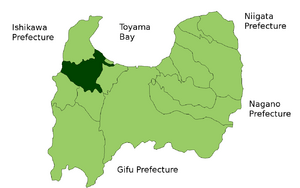 Takaoka (高岡市code: ja is deprecated , Takaoka-shi) is a city in the northwestern portion of Toyama Prefecture, Japan. Takaoka has the second largest population after Toyama City.

The Takaoka region extends 19.2 km from north to south, 24.5 km from east to west with a perimeter of 125.9 km – which is roughly equal to the length of coastline in Toyama Prefecture (147 m). Takaoka borders four cities in Toyama Prefecture (Himi, Oyabe, Tonami, and Imizu) and two towns in Ishikawa Prefecture (Tsubata and Hōdatsushimizu).

From its border with Himi down to the southwest area of the city, a range of mountains stretch for roughly 150 m to 300 m with a particularly high stretch of mountains centering on Mt. Futagami near Himi. Shogawa River and the Oyabegawa River run through Takaoka and tributaries weave their way through the city center. Including small rivers, a total of 10 rivers flow through the city. The Amaharashi coast lies to the north of the region. Just off the coast lies the uninhabited offshore rock of Otokoiwa. Another uninhabited rock, Onnaiwa, lies nearby and the view of this island against the backdrop of the Tateyama range of peaks is famous and features in promotional media for the region. A section of the Imizu plains runs from the central district of the city to the eastern district, and the Tonami plains which stretch from the west to the south are dotted with dispersed settlements in certain areas.

Takaoka was established in 1609. It developed as a castle town.

The modern city of Takaoka was established in 1889.

In 1933, Takaoka's large statue of the Buddha (Daibutsu) was created.

All content from Kiddle encyclopedia articles (including the article images and facts) can be freely used under Attribution-ShareAlike license, unless stated otherwise. Cite this article:
Takaoka, Toyama Facts for Kids. Kiddle Encyclopedia.