Tamarugal (Spanish: Provincia de Tamarugal) is one of two provinces in the northern Chilean region of Tarapacá (I). The capital is the city of Pozo Almonte.

Tamarugal means "a place where there are many tamarugos"; tamarugo (Prosopis tamarugo) is a tree endemic to the arid lands of northern Chile.

Tamarugal is bordered on the north by the Arica and Parinacota region, on the east by Bolivia, on the south by the Antofagasta region and on the west by the Iquique province and the Pacific Ocean.

As of 2002[update] (last national census), there were 22,531 people living in the province, giving it a population density of 0.6 inhabitants/km².

The largest city of the province is Pozo Almonte, its capital, with a population, in 2002, of 6,384 inhabitants.

As a province, Tamarugal is a second-level administrative division, consisting of five communes (comunas). The city of Pozo Almonte serves as the provincial capital. The province is administered by a governor. 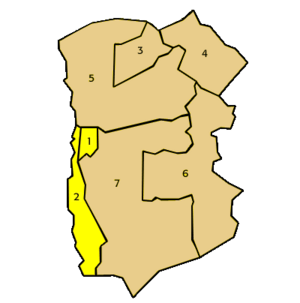 The Tamarugal province, in brown

All content from Kiddle encyclopedia articles (including the article images and facts) can be freely used under Attribution-ShareAlike license, unless stated otherwise. Cite this article:
Tamarugal Facts for Kids. Kiddle Encyclopedia.