Temescal Creek is one of the principal watercourses in the city of Oakland, California, United States.

The word "temescal" derives from the word temescalli, which means "sweat house" in the Nahuatl language of the Mexica ("Aztec") people of Mexico. The name was given to the creek when it became part of the Peralta's Rancho San Antonio. It is surmised that the Peraltas or perhaps one of their ranch hands (vaqueros) had seen local indigenous (Ohlone) structures along the creek similar to those in other parts of New Spain which were called temescalli.

Three forks begin in the Berkeley Hills in the northeastern section of Oakland (also referred to as the Oakland hills south of the Caldecott Tunnel), part of the Pacific Coast Ranges, coming together in the Temescal district of Oakland, then flowing westerly across Oakland and Emeryville to San Francisco Bay.

The north fork of Temescal Creek was renamed "Harwood's Creek" in the mid 19th century after an early claimant to grazing lands in the canyon above the Claremont neighborhood, retired sea captain and Oakland wharfinger William Harwood. It was renamed yet again "Claremont Creek" in the early 20th century after a residential development in the same vicinity, today's Claremont district.

The middle fork flows through Temescal Canyon, now mostly in underground culverts beneath the large freeway leading to the Caldecott Tunnel. It joins the south fork at Lake Temescal. Before the tunnel project (1934–37), this fork entered the lake via a prominent inlet that was traversed by a trestle bridge of the Sacramento Northern Railroad. The inlet was filled in and the trestle replaced by a large concrete embankment which exists to this day.

The south fork begins in the northern section of Oakland's Montclair district, flowing southwest out of a canyon in the hills alongside Thornhill Road, then turning abruptly northwestward in the linear valley formed by the Hayward Fault. It then flows into Lake Temescal, a natural sag pond which was dammed in the 19th century to increase its capacity for use as a reservoir. Lake Temescal is now a public park.

The creek continues out of Lake Temescal, curving westerly around the end of the shutter ridge in the Rockridge district of Oakland, where it joins the north fork (Claremont Creek) at approximately the intersection of Forrest Street and Miles Avenue adjacent to the Grove-Shafter Freeway (State Route 24). It then flows parallel to Claremont Avenue above ground just before crossing Telegraph Avenue. It then flows in a culvert across Telegraph Avenue until about 47th Street where it makes a westward turn, flowing toward the Bay. 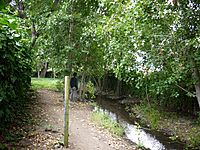 Temescal Creek is a perennial stream, and as such, was highly valued by early settlers. At its mouth, the indigenous Ohlone people (Chochen/Huichin band), and their predecessors, built up the shellmound of Emeryville, the largest and most studied shellmound on the shoreline of San Francisco Bay.

When the area was part of the Peralta's Rancho San Antonio, the site near the shellmound was one of the landings for the ranch where their cattle and hides were loaded for shipping. Cattle and other livestock were slaughtered in this vicinity right up through the early 20th century for various meatpacking plants in an area which became known as "Butchertown".

It is believed that Temescal Creek once supported a population of rainbow trout, though urbanization and the damming at Lake Temescal have led to their decline. Archeological evidence indicates that coho salmon were also likely found at one time in the creek. The Emeryville Shellmound is also notable for its remains of beaver (Castor canadensis).

Today, the creek is mostly underground in culverts in the flatlands, but many stretches are open above Lake Temescal. In 2000, a segment of the creek below the tracks of the Union Pacific Railroad in Emeryville became accessible to the public after the demolition of one of the buildings of the historic Sherwin-Williams paint factory in early 2000. Temescal Creek now flows in an open culvert through the 2002 Bay Street Mall development. This is just about the spot where the Emeryville Shellmound once stood. A small informational park commemorating the creek and the Ohlone presence at the site is situated here.

At Shellmound Street, which runs approximately along the original Bay shoreline, the creek returns to a culvert which takes it to San Francisco Bay. This straight course, however, is a later imposition - the original course of the creek bent south and entered the Bay near the northern edge of the IKEA property. Temescal Creek near the mouth area is channelized with concrete linings. The mouth of Temescal Creek at the discharge to San Francisco Bay is fully tidal and consists of mudflats and marshland. Historically both banks of Temescal Creek in the lower area of Emeryville were part of the San Francisco Bay tidal floodplain and were extensively filled from about 1900 through the 1970s. Fill included slag, soil and other inert materials originating from the Judson Steel plant. The Judson plant occupied much of the lower reach banks in Emeryville; Judson used this reach for metal recycling/recovery. Foundations remained of a shear, tin baler, scale, and conveyor as late as 1990 when the lower banks were renamed the "Chiron" site and re-developed.

All content from Kiddle encyclopedia articles (including the article images and facts) can be freely used under Attribution-ShareAlike license, unless stated otherwise. Cite this article:
Temescal Creek (Northern California) Facts for Kids. Kiddle Encyclopedia.