Tenko and the Guardians of the Magic facts for kids

Saban's Tenko and the Guardians of the Magic is a 1995–1996 American cartoon show produced by Saban Entertainment that centered on the fictional adventures of Japanese real-life magician Princess Tenko, Mariko Itakura. After each episode, she would appear in a live-action segment to perform an illusion or do her "Teach-A-Trick," a segment that teaches the audience a simple magic trick they could perform at home. The show failed to attract an audience and production was cancelled after a single season.

A young female magician, already an experienced performer, is chosen by an old man named Tenko to come to his school for magicians and learn real magic. At the school, the young magician befriends a number of other magicians already attending the school and learning magic from Tenko. The new magician begins her training and quickly becomes the best magician at the school.

Impressed by her abilities, the master names the young magician "Princess Tenko" in recognition as his successor as the next Tenko and the Master Guardian of the Tenko Box, a magical wardrobe that contains many magic gems known as the Starfire Gems. Two of the most senior students, the twins Jana and Jason watch on. Jana become jealous of the newcomer when she is chosen to become Tenko's successor and conspires for rebellion. Jason tries to talk some sense stating that unlike Jana who had slacked off during training, Mariko is more responsible and therefore Tenko could trust her. She convinces him to help her and succeed at stealing two of the Starfire Gems for their own use.

When Jana and Jason are discovered, Master Tenko is overcome by their magic. In the scuffle, the Tenko Box is damaged, and the remaining Starfire gems are scattered all over the world and some through time. The twins escape as the new Tenko arrives in an attempt to stop them. Pleased with the young magician's abilities, Master Tenko entrusts Princess Tenko and his remaining students with Starfire Gems he had hidden away and the duty of recovering and protecting the other Starfire Gems from the forces of evil. 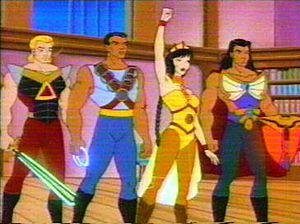 The main protagonists of the series from left to right: Bolt, Steel, Tenko, and Hawk.

Note: Jason and Jana can transform into a two-headed dragon by touching their Starfire Gems together.

Note: The first six episodes are available on 3 DVDs in the United Kingdom, released by Boulevard Entertainment.

All content from Kiddle encyclopedia articles (including the article images and facts) can be freely used under Attribution-ShareAlike license, unless stated otherwise. Cite this article:
Tenko and the Guardians of the Magic Facts for Kids. Kiddle Encyclopedia.