The Tennessee warbler (Leiothlypis peregrina) is a New World warbler that breeds in eastern North America and winters in southern Central America, the Caribbean, and northern South America. The specific name peregrina is from Latin peregrinus "wanderer". 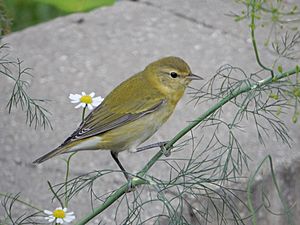 Female during migration in Chicago

The Tennessee warbler is 11.5 cm (4.5 in) long, has a 19.69 cm (7.75 in) wingspan, and weighs roughly 10 g (0.35 oz). The breeding male has olive back, shoulders, rump and vent. The flight feathers are brownish-black. It has a slate gray neck, crown and eyeline. The underside is a gray-white. The female is similar to the male, but is much duller and has a greener tinge to the underside. The Tennessee warbler has long wings, short tail and a thin, pointy bill. Juveniles and first-year birds are quite similar to the female.

This bird can be confused with the red-eyed vireo, which is larger, moves more deliberately and sings almost constantly. The orange-crowned warbler can also look similar, but lacks the white eyebrow, is greyer-brown above and has yellow undertail coverts.

The Tennessee warbler breeds from the Adirondack Mountains in New York through northern Vermont, New Hampshire, and Maine north and west throughout much of Canada. It is also found breeding in northeast Minnesota and northern Upper Peninsula of Michigan. It is migratory, wintering in southern Central America, the Caribbean, and northern Colombia and Venezuela, with a few stragglers going as far south as Ecuador. It is a very rare vagrant to western Europe. This bird was named from a specimen collected in Tennessee, where it may appear during migration.

The Tennessee warbler feeds mainly on insects and prefers the spruce budworm. This species fluctuates in population with the quantity of the budworm. It also likes flower nectar, fruit and some seeds.

This warbler, like most others, is nervous and quick while foraging. It creeps along branches and is found at all levels. It is solitary while nesting, but forms mixed flocks after breeding.

The Tennessee warbler prefers coniferous forests, mixed conifer-deciduous forests, early successional woodlands and boreal bogs. It makes a cup-shaped nest of dried grasses and moss lined with finer grasses, stems and hair. The nest can be placed on the ground or above a bog in moss or in the base of a shrub. The nest is built by the female, and she lays 4–7 white eggs with brown splotches on them.

All content from Kiddle encyclopedia articles (including the article images and facts) can be freely used under Attribution-ShareAlike license, unless stated otherwise. Cite this article:
Tennessee warbler Facts for Kids. Kiddle Encyclopedia.