The black-throated blue warbler (Setophaga caerulescens) is a small passerine bird of the New World warbler family. Its breeding ranges are located in the interior of deciduous and mixed coniferous forests in eastern North America. Over the cooler months, it migrates to islands in the Caribbean and Central America. It is very rarely found in western Europe, where it is considered to be a non-indigenous species. The black-throated blue warbler is sexually dimorphic; the adult male has a black face and cheeks, deep blue upperparts and white underparts, while the adult female is olive-brown above and light yellow below.

The black-throated blue warbler is one of the New World warblers or wood-warblers in the family Parulidae. This species was originally placed under the genus Dendroica. It was recently adjusted to be a member of genus Setophaga along with all other members of the genus Dendroica, based on the findings from a recent phylogenetic analysis of mitochondrial DNA and nuclear DNA in 2010. The old genus Dendroica was then deleted. Within the genus, it appears to have no particularly close relatives. 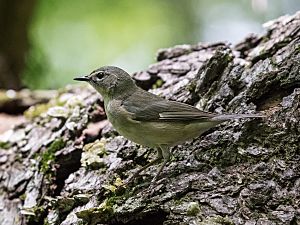 The black-throated blue warbler measures 13 cm (5.1 in) in length and weighs 8.4–12.4 g (0.30–0.44 oz). Wingspan ranges from 7.5-7.9 in (19-20 cm). This is a strongly sexually dimorphic bird. The adult male has white underparts with a black throat, face and flanks. The upperparts are deep blue. The immature male is similar, but with greener upperparts. The female has olive-brown upperparts and light yellow underparts with darker wings and tail, gray crown and brown patches on the cheek. Both sexes have a thin pointed bill and small white wing patches which are not always visible. Like many other warbler species, it has colorful plumage during the spring and summer. However, outside the breeding season its plumage is drab and less distinctive. In the fall, the black-throated blue warbler can be distinguished by its small white wing patches. Juveniles have brown upperparts with a creamy supercilium and brownish spots on the throat, the breast and the belly.

The bird's song can be described as a buzzed zee-zee-zeeee with an upward inflection. Its call is a flat ctuk. 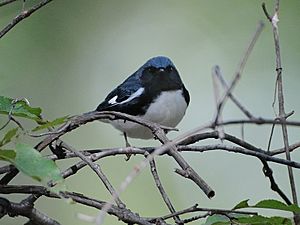 Male at the Pinery Provincial Park

The black-throated blue warbler forages actively in low vegetation, sometimes hovering or catching insects in flight. It often forages in one area for a while before moving on to the next. It mainly eats invertebrates such as caterpillars, crane flies, and spiders. It may supplement its diet with seeds, berries, and fruit in the winter.

Males and females prefer different foraging sites. While males usually hover among the higher shrub foliage between 3 and 9 m (9.8 and 29.5 ft), females tend to forage at lower strata. The time within a breeding season influences where the males forage. When it is time to feed the fledglings, males come down to the same foraging strata as females. The black-throated blue warbler mostly forages in the understory instead of the canopy. The large leaves and long branches in the understory affect its foraging behaviors. The black-throated blue warbler more often hovers rather than gleans its prey because it is more difficult to glean among thick understory foliage. 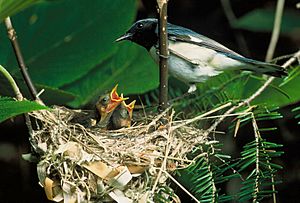 The black-throated blue warbler is a monogamous species. Its breeding season usually begins in May and ends in July. As a songbird, the male black-throated blue warbler attracts a female's attention by singing a soft melody. He then follows the female while she is foraging or searching for nesting sites. As soon as the female stops to rest, the male droops his wings slightly, stretches his head forward and up, opens his bill, and faces the female. The female also makes displays to the male by vibrating her wings. In response, the male mounts the female for 2–3 seconds and then flies off.

A 1996, researchers showed that the black-throated blue warbler prefers to reside in hardwood forests with higher shrub densities where food is more abundant compared to lower shrub density plots. Within these high shrub density habitats, not only is there a higher density of warblers, but the population age average is also older, being composed of males and females who are at least two years of age.

The black-throated blue warbler uses social cues in its evaluation and choice of nesting sites. In particular, it listens to the post-breeding songs given out by other males. These songs have strong temporal dependencies. Males sing at the beginning and the peak of breeding season, but songs are not indicative of reproductive success. Near the end of a breeding season, a male that has successfully mated continues to sing while a male that has failed to reproduce abandons the habitat. Therefore, post-breeding songs are reliable indicators of reproductive success within the particular habitat and convey essential information to the natal and breeding dispersers. In comparison to the traditional idea of direct assessment of the vegetation structure, the vocal cue is much more efficient and easier to obtain, hence revealing the advantage of social communication in survival and reproduction. A female, however, does not respond to post-breeding songs directly. Instead, she is likely to rely on the presence of males in deciding nesting sites.

Although the black-throated blue warbler is a socially monogamous species, males are frequently observed in territories of other males, suggesting the occurrence of extra-pair matings. Nestling parentage is identified by microsatellites in a study plot at the Hubbard Brook Experimental Forest in New Hampshire. The results show that extra-pair fertilization occurs and that the majority of the extra-pair sires come from males in neighboring territories. Only very few extra-pair sires are from distant territories. This local reproductive interaction is also supported by another study conducted earlier, which finds that extra pair fertilizations are strongly and positively correlated with local synchrony but there is no significant association with population level synchrony.

The black-throated blue warbler enjoys a large range and a big population. Its population trend is currently increasing. This species was ranked as Least Concern by the IUCN in 2012. Deforestation and habitat fragmentation are threatening the black-throated blue warbler in its tropical wintering areas. A report in 2000 discussed the impact of global climate change on the population dynamics of the black-throated blue warbler by an observation from 1986 to 1998. In particular, the effect of El Niño Southern Oscillation (ENSO) was studied in relation to the survival, fecundity and recruitment of this migratory bird. It was found that El Niño years (the warm South Pacific oceanic phase) were associated with lower adult survival rate in their wintering ground, Jamaica, lower fecundity in the breeding habitats in New Hampshire of the United States, and lower annual recruitment of yearlings and juveniles to both breeding and wintering grounds. All the three factors were relatively higher during La Niña years (cold South Pacific Ocean) when the weather was wetter and the food availability was much more abundant. Long-term global warming can aggravate the ENSO effect, adding to the fluctuation of the black-throated blue warbler population.

All content from Kiddle encyclopedia articles (including the article images and facts) can be freely used under Attribution-ShareAlike license, unless stated otherwise. Cite this article:
Black-throated blue warbler Facts for Kids. Kiddle Encyclopedia.