The Grange, Edinburgh facts for kids

Kids Encyclopedia Facts
This page is about the area of Edinburgh. For the cricket club of the same name, see The Grange Club. 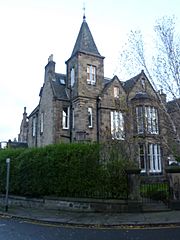 Villa in The Grange

The Grange (originally St Giles' Grange) is a suburb of Edinburgh, about one and a half miles south of the city centre, with Morningside and Greenhill to the west, Newington to the east, and Marchmont to the north. It is a conservation area characterised by large late Victorian stone-built villas, often with very large gardens. Many have now been sub-divided into flats, with further flats often being built on the grounds.

There are mentions of 'Sanct-Geill-Grange' in charters of King David and King Edgar, as church lands attached to St. Giles parish church in Edinburgh, the king retaining the superiority. The word grange is common across Britain and normally links to an extensive farm with a central mansionhouse (corrupting to the word range in America). On June 16, 1376, King Robert II granted the superiority of the barony and lands of St Giles to his eldest son, John, Earl of Carrick, Steward of Scotland. In 1391 the estate was conferred upon the Wardlaw family.

On October 29, 1506, St Giles Grange passed to John Cant, a Burgess of Edinburgh, and his spouse Agnes Carkettle, and in 1517 they granted the use of 18 acres (73,000 m2) of land to the nuns of St. Catherine of Siena. On March 19, 1691 a John Cant sold St Giles Grange in its entirety to William Dick. It is interesting to note that at that time the 18 acres (73,000 m2) previously feued to the nuns was now in the possession of Sir John Napier, the famous inventor of logarithms. When Isabel Dick, the heiress, married Sir Andrew Lauder, 5th Baronet of Fountainhall, in 1731, The Grange passed to him. 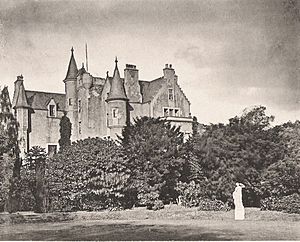 The original tower house appears to be of a very early date possibly the 13th century, ornamented with two turrets and a battlemented roof; its position was isolated at the eastern end of the Burgh Muir, which at that time consisted of waste tracts of moorland and morass, stretching out southward as far as the Braid Hills and eastward to St. Leonard's Crags.

The mansion, The Grange House, was enlarged over the centuries, a major restoration being carried out by Sir Thomas Dick Lauder, Bt. On May 16, 1836, Lord Cockburn recorded in his diary: "There was an annular eclipse of the sun yesterday afternoon....it was a beautiful spectacle......I was on the top of the tower at The Grange House, with Sir Thomas Dick Lauder and his family."

The house survived until 1936 when it was demolished to make way for flats. Stone wyverns from its gateposts, known locally as the 'Lauder griffins', were re-erected in Grange Loan. One was placed at the entrance to a stretch of Lover's Loan, a centuries-old path which was preserved in a late 19th-century redevelopment and is marked out with high stone walls separating it from the gardens on either side. At one point the path borders the Grange Cemetery where various well-known people are buried, including Sir Thomas Dick Lauder, Hugh Miller, and Thomas Chalmers.

In 1825 Thomas Dick Lauder the then owner of the Grange, sold off a large area of land for development (mow the area between Dick Place and Grange Road. This linked to a new access road to the east (now called Newington Road). Lauder controlled development of the land through a strong feuing plan and developments required his approval. The original feuing plan included curious plot names such as Little Transylvania and Greater Transylvania (both north of Grange Loan). Grange House remained in a large plot in the centre of Grange Loan.

From the 1840s The Grange was developed as an early suburb, built gradually upon the lands of The Grange estate — still owned by the Dick Lauder family. The area was originally laid out by the architect David Cousin but then the feuing was altered (1858) and greatly extended southwards (1877, following great success) by the architect Robert Reid Raeburn.

Some of the Victorian villas still retain substantial mature trees and gardens which pre-date the housing. In 1835 Earl Grey (of Reform Bill fame) stayed with Sir Thomas Dick Lauder at The Grange House, and commemorated his visit by planting an oak-tree in a conspicuous spot in The Avenue, upon the bank of the north side, not very far from the ivy-clad arch. It was called 'Earl Grey's Oak' and was still healthy in 1898. It is not known if it has survived.

Within the area lies the campus of the Astley Ainslie Hospital. This large area of ground was gifted as a hospital in 1921 as part of the will of John Ainslie.

The Grange Cricket Ground is the last vestige of the major open space which used to surround Grange House. 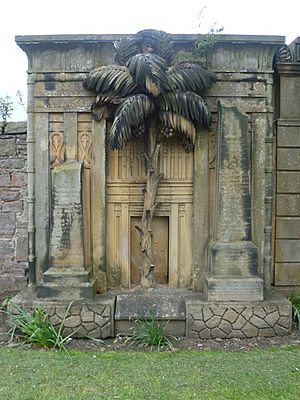 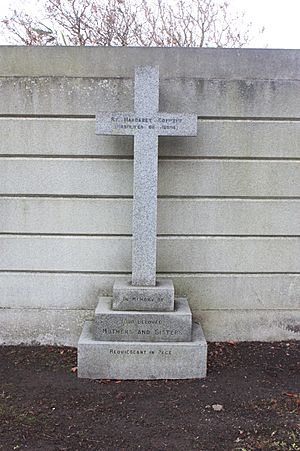 The communal grave of the nuns of St Margaret's Convent, Grange Cemetery, Edinburgh

This was laid out in 1847 by the Edinburgh architect David Bryce and is more rectilinear in layout than its predecessors, Warriston Cemetery and Dean Cemetery. It was original entitled the Southern Edinburgh Cemetery.

It includes a very interesting "Egyptian portal" to the land of the dead for the wife of a William Stuart (died 1868) on the north wall, by the sculptor Robert Thomson. Sculptures by William Birnie Rhind (Dr. James Cappie) and Henry Snell Gamley (David Menzies) can also be found. There are also multiple ornate Celtic crosses, mainly by Stewart McGlashan. Other notable graves include:

There are war graves of 40 Commonwealth service personnel of both World Wars and a communal grave for the nuns of St Margaret's Convent.

Residents of the suburb have included the author J.K. Rowling and the former CEO of RBS, Fred Goodwin. Goodwin relocated from The Grange after the vandalism to which his property there was subjected but has since returned after his wife's throwing him out of their family home in Colinton due to revelations of his marital infidelity.

The Grange was also a principal filming location during the production of the BBC Three comedy-drama Pramface which starred Scarlett Alice Johnson and Sean Michael Verey in the lead roles. The Grange features extensively in the showpiece but is appropriated in order to pose as an upmarket North London suburb due to its appearance similarities for the sake of plot integration.

All content from Kiddle encyclopedia articles (including the article images and facts) can be freely used under Attribution-ShareAlike license, unless stated otherwise. Cite this article:
The Grange, Edinburgh Facts for Kids. Kiddle Encyclopedia.