The Meadows, Nottingham facts for kids

The Meadows is an area of Nottingham, England located south of the city centre. 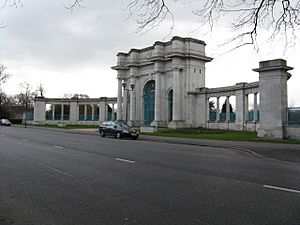 The area is close to the River Trent and is connected to West Bridgford in the Borough of Rushcliffe by Trent Bridge and the Wilford Suspension Bridge. Victoria Embankment runs alongside the River Trent to the south of the Meadows and is home to the Nottingham War Memorial Gardens. The Meadows is made up of two distinct areas, the Old Meadows; an area of predominantly pre 1919 privately owned terraced housing laid out in a traditional street pattern, and the New Meadows; an area of mainly social rented housing, built in a Radburn style layout following slum clearance in the late 1970s, and now being transformed into a more traditional layout by re-establishing vehicular access and reversing the orientation of some of the houses. Unpopular deck access maisonettes have been demolished. The Community, still reestabishing, has once again been displaced and dispersed after only 40 years.

The area is served by two tram routes, and two bus routes while a dozen more pass along the peripheral roads and it is a short walk to Nottingham railway station The Bridgeway shopping centre is a pedestrianised shopping precinct located in the centre of the Meadows. It provides a much needed focus for the community cohesion, but is also facing uncertainty about its future.

All content from Kiddle encyclopedia articles (including the article images and facts) can be freely used under Attribution-ShareAlike license, unless stated otherwise. Cite this article:
The Meadows, Nottingham Facts for Kids. Kiddle Encyclopedia.