The Thebarton Theatre (also known as Thebbie Theatre, Thebbie or Thebby) is an entertainment venue located in the inner-western Adelaide suburb of Torrensville, South Australia. Its capacity is 2,000 people, with customisable seating, enabling to be arranged from "in the round", or with the seating partially or fully removed to make room for a dance floor. It is known as a music venue for both big international names and newly-established artists, as well as a range of other types of performance.

Thebarton Theatre is in partnership with Holden Street Theatres, and houses its office headquarters. 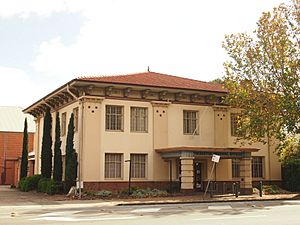 When the "old" Town Hall, designed by Withall & Wells and built in 1885, proved inadequate, the council bought land on the corner of Henley Beach Road and Taylor's Road (now South Road).

The theatre was listed on the South Australian Heritage Register on 23 September 1982. Along with the adjacent municipal offices, it is listed among the 120 nationally significant 20th-century buildings in South Australia.

Thebarton Theatre is in partnership with Holden Street Theatres, and houses its office headquarters.

The capacity of the theatre is 1,990 fully reserved seating, or 2,000 people with some general admission, but there is a huge amount of flexibility for other configurations, wheter a dance floor, kickboxing tournament or intimate performance.

All content from Kiddle encyclopedia articles (including the article images and facts) can be freely used under Attribution-ShareAlike license, unless stated otherwise. Cite this article:
Thebarton Theatre Facts for Kids. Kiddle Encyclopedia.