Thingmaker, also called Creepy Crawlers, is an activity toy made by Mattel, beginning in 1964. The toy consists of a series of die-cast metal moulds resembling various bug-like creatures, into which is poured a liquid chemical substance called "Plastigoop", which comes in assorted colours. The mould is then heated to about 390 °F (199 °C) in an open-face electric hot plate oven. The Plastigoop is cured by the heat, and when cooled forms semi-solid, rubbery replicas which can be removed from the mould.

The concept of the Thingmaker was introduced in 1963, as part of Mattel's Vac-U-Maker set. This omnibus toy combined the new moulds and Plastigoop technology with the existing Vac-U-Form machine, which molded simple sculptures by heating thin sheets of plastic, then using a vacuum pump to form the softened plastic over hard plastic forms. Following this introduction period, the Thingmaker portion was spun off as a separate set, and launched as the "Creepy Crawlers" line.

Mattel packaged moulds from various sets to be sold separately, and also combined moulds into larger omnibus editions, encompassing several themes into one set, under names such as "Triple Thingmaker", "Super Thingmaker" and "Every Thingmaker". Mattel produced many Thingmaker sets as follow-ups to the original "Creepy Crawlers" throughout the 1960s, utilising a variety of themes, aimed at both boys and girls. There were also several exclusive single mould sets, such as Superman and Tarzan, and original Mattel concepts including Squirtles and Gangly Danglies.

It is generally believed that production of the original Mattel Thingmakers was discontinued following consumer safety concerns over allowing children to use a small electric heater as a toy.

In 1978 Mattel released an updated (and safer) model of their "Creepy Crawlers" toy. Called the "Thingmaker II", this version used a very differently formulated Plastigoop, and used plastic moulds, into which was poured the heated Plastigoop. In this set one heated the Plastigoop and poured it into the green plastic mould(s) to cool; the moulds were not put into the heater, which looked like a small cauldron. The reformulated Plastigoop did not work well and the process of making bugs, etc. with these sets was typically slow, taking an hour or so to make a creation. Needless to say, the late 1970s sets did not work as well as their predecessors, and the attempted revival was a short-lived one. Only two sets were produced - Creepy Crawlers and Flower Fun. 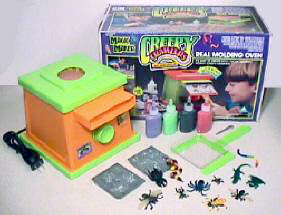 After being out of production for more than a decade, the "Creepy Crawlers" brand was brought back in 1992 by a New York-based company called ToyMax. With much stricter safety regulations in place, the new version of the Creepy Crawlers set re-introduced the metal moulds and earlier Plastigoop-type formulation, but now used a lightbulb-powered "Magic Maker" heater, with a heat-triggered door designed to remain closed until the mould had cooled sufficiently to be handled safely.

The name "Magic Maker", as well as the new oven design, were borrowed from an earlier 1980s-era toy that melted clear coloured plastic granules to form sun catcher window decorations. Over the next five years new mould designs were released as well as new mould packs. Apparently Mattel, the originator of Creepy Crawlers, had let its trademarks lapse, for many of the original Mattel concepts were revisited, such as "Creeple Peeple", "Mini-Dragons", "Eeeks" (ToyMax changed the spelling), and "DollyMaker". Numerous licenses were also employed, resulting in mould designs featuring such characters as Bugs Bunny, The Mighty Morphin Power Rangers, Batman, Woody, Buzz Lightyear, Rex, Hamm and the Green Army Men from Toy Story, and The Mask. The new formula Plasti-Goop had an array of colours, and several varieties, including

Toward the end of the ToyMax run, the oven was redesigned to incorporate a fold-down hinged door, and required less at-home assembly. Releases of new mould packs became more and more sporadic over time. In 1997, a wave of moulds (and a new oven set) based on the second Jurassic Park film, and an original line of "Mutant Squad" Plasti-Goop-based figures (three of the six planned "Mutants" were never released) heralded the end of another era of "Thingmaking", and the beginning of a third period of hiatus. In 2001, ToyMax tried again, with both a "Creepy Crawlers" and a "DollyMaker" line, but this revival was brief.

Since then, a third company, Jakks Pacific, based in California, has taken up the reins of producing Creepy Crawlers toys. Although most of the Jakks Pacific line merely re-used mould designs from the extensive ToyMax oeuvre, they have also produced new character moulds featuring SpongeBob SquarePants and Hello Kitty. New releases of oven sets and mould packs have been sporadic, and seem to come very much at random. Although Christmas 2006 saw release of three "new" mould designs at the hands of Jakks Pacific, the numbering of these moulds seems to suggest that they are actually unreleased designs from the ToyMax era.

In 2007, Jakks Pacific released a Pokémon-themed Creepy Crawlers Oven and Mould Paks, and in late 2008, another Oven Set based on the Star Wars: Clone Wars license was released, again just in time for Christmas gift-giving.

In the Autumn of 2010, Toys "R" Us stores released a line of exclusive "Creepy Crawlers" Activity Toys (produced by Jakks-Pacific) that use injection moulding and hollow, two-sided moulds to create bugs and spiders in solid, wall-crawling and gut-filled "squishable" varieties. Reviews on the Toys "R" Us site indicate numerous problems with the moulds leaking in the Creepy Crawlers injector models.

As of Spring 2012, the once-exclusive Jakks-Pacific "Creepy Crawlers" sets and refill accessories are available at other outlets, such as K-Mart and Target.

In 2016, Mattel announced a new version of the ThingMaker, capable of 3D printing toys. The 3D printer version was originally planned for an Autumn 2016 release, but it was pushed to 2017. However, the printer wasn't even released then, and replying to a Twitter comment, Mattel confirmed on November 20, 2017, that plans for the 3D printer version are still being reviewed, and a firm release date has not yet been set, adding that they are working hard to deliver a product that families will love, and once they have more information, they'd report it at their website. Since then, the website went offline. In another Twitter reply, on March 28, 2019, it was revealed that Mattel had discontinued and cancelled the project, and apologized for not delivering any better news for it.

ToyMax developed their own entertainment property based on the Creepy Crawlers concept, which became a Saturday morning cartoon — the series lasted two seasons (23 episodes, including one unaired episode that later saw release on video) and a line of 12 action figures that each came with a metal mould, with which to make unique accessories for the figures.

In May 2018, it was announced that a film based on Creepy Crawlers is in development. The film rights were acquired by Paramount Pictures. It's scheduled to be produced by Paramount Players and Original Film. The upcoming film's producers include Neal H. Moritz, Marc Gurvitz and Toby Ascher. Stephen Berman, chairman and CEO of JAKKS Pacific, will serve as executive producer.

All content from Kiddle encyclopedia articles (including the article images and facts) can be freely used under Attribution-ShareAlike license, unless stated otherwise. Cite this article:
Thingmaker Facts for Kids. Kiddle Encyclopedia.