Kids Encyclopedia Facts
This page is about the town in Thurrock, Essex, England. For other uses, see Tilbury (disambiguation).

Tilbury is a town in the borough of Thurrock, Essex, England. It was established in the late 19th century, on land that was mainly part of Chadwell St Mary. It contains a 16th century fort and an ancient cross-river ferry. Tilbury has a major deep-water port which contributes to the local economy.

The name of the present town of Tilbury is derived (by way of the port) from the nearby settlements of East and West Tilbury. The name of these settlements is derived from the Saxon burgh, "fortified place", either belonging to Tila, or perhaps at a lowland place. The 8th century spelling (Bede) was "Tilaburg", and the spelling in Domesday was "Tilberia".

Tilbury's history is closely connected with its geographical location (see below). Its counterpart on the south bank of the River Thames, Gravesend, has long been an important communications link, and it was there that a cross-river ferry (see below) was connected, mainly due to the narrowness of the river at this point. In addition, Gravesend and Northfleet (also on the south shore) both became vitally important to shipping on the Thames: the former as the first port of call for foreign shipping bound for London, and the latter as a naval dockyard.

There is archaeological evidence of Roman occupation. At the time, sea-levels had dropped, making the marshes habitable. There may well have been a Roman settlement on the site of what is now Tilbury Docks. In the 12th century the river, which had hitherto consisted of difficult channels with uncharted shoals, was changed by the process of embanking the river and enclosing areas of marsh. This improved the river's flow, and also resulted in improved land resources on the marsh. It was nevertheless an unhealthy place in which to live; Daniel Defoe, who, in 1696, operated a tile and brick factory in the Tilbury marshes and lived in a nearby house, wrote about "the Essex ague".

In 1588 Queen Elizabeth I came ashore here to review her main army at the nearby village of West Tilbury (see Speech to the Troops at Tilbury).

In 1852 an Act of Parliament had authorised the building of the London Tilbury and Southend Railway (LTSR), with a short spur to take advantage of the ferry over the Thames; a pier nearby was constructed for the steamboat traffic. The station was originally named Tilbury Fort and opened in 1854. The station was renamed Tilbury Riverside railway station in 1936.

A few houses were built for the railway workers, but it was not until the construction of Tilbury Docks (see below) that there was any settlement worthy of a name. Whilst the docks were being built, the thousands of workers were either provided with temporary accommodation or had to commute from surrounding villages and towns. As a result of overcrowding, more permanent housing was built once the docks were completed, including tenement blocks; but these were poorly constructed, and until the formation of Tilbury District Council (see below) the town was in a poor state, as it largely remained until 1918, when government funds were available to better the situation. 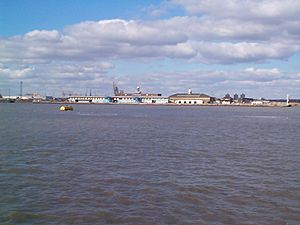 Tilbury–Gravesend Ferry has operated from very early times. A sketch-map of 1571 shows evidence of two jetties, the one on the north bank leading to a northward road crossing the marsh. There are also houses marked on the marsh itself, which became important for sheep grazing; and there is some evidence to suggest that the ferry was used for the cross-river transport of animals and wool. Although the 17th century drawing might suggest a boat too small for large consignments, the long-established Gravesend market encouraged such traffic, and a contemporary account suggests that one of the boats used was a hoy, a forerunner of the Thames sailing barge.

The curve and narrowness of the river here made it a suitable place to construct forts for the defence of London against foreign invaders. The first permanent fort at Tilbury was a D-shaped blockhouse built in 1539 by Henry VIII and initially called the "Thermitage Bulwark", because it was on the site of a hermitage dissolved in 1536. The Tilbury blockhouse was designed to cross-fire with a similar structure at New Tavern, Gravesend. During the Armada campaign (1588), the fort was reinforced with earthworks and a palisade, and a boom of chains, ships' masts and cables was stretched across the Thames to Gravesend, anchored by lighters. The fort was rebuilt under Charles I and is now owned by English Heritage.

Tilbury is on the north bank of the River Thames, where the river's meander has caused it to narrow to approximately 800 yards (732 m) in width. The area to the north is one-time marshlands; to the north of that there is higher ground, where lie the villages of Chadwell St Mary, West and East Tilbury. The town lies to the north of the London-Southend railway line.

The major landmarks are the docks, the cruise-ship landing stage, and the Tilbury Power Station. There are two churches in Tilbury: St John's (Church of England) and Our Lady Star of the Sea (Roman Catholic); there is also a Convent of Mercy. There is, in addition, a synagogue in Dock Road. The educational institutions in Tilbury include primary education, which are Lansdowne Primary School, St Mary's RC Primary School and Tilbury Manor Primary School. The last serve Infant and Nursery, as well as Junior children. 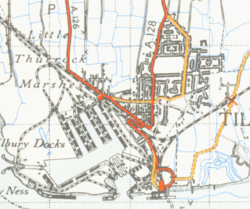 Map of the town from 1946
Main page: Port of Tilbury

The Port of Tilbury handles a variety of bulk cargo, timber, cars and container traffic and remains, along with Southampton and Felixstowe, one of Britain's three major container ports. It is the main UK port for importing paper, including newsprint. The one-time passenger landing stage was reopened by the Port of Tilbury group as the London Cruise Terminal, though it is no longer served by the railway.

Until the introduction of standardised containers, the majority of the town's inhabitants were employed in the docks. The resulting loss of jobs has never been made up, and Tilbury today has high unemployment and education and employment prospects are widely perceived as poor.

Thurrock Council, together with Kent County Council, subsidises the ferry between Tilbury and Gravesend, which is currently operated by the Lower Thames & Medway Passenger Boat Company. Tilbury Town railway station is on the c2c (London, Tilbury and Southend) rail route. Tilbury Riverside railway station was closed on 29 November 1992, although the railway still serves the nearby container depot. Bus route 99 (operated in partnership by both c2c rail and Ensignbus). now connects Tilbury Town railway station and the ferry. Ensignbus services 66 and 73/73C serve Tilbury, connecting to Grays and Lakeside Shopping Centre. National Cycle Route 13 from London to Norfolk passes through the town.

The Tilbury Band, dating from 1919, is among the leading brass bands in the UK. Tilbury and its environs have been used in some television episodes. Tilbury Fort was used as a location for Sharpe's Regiment, starring Sean Bean; an episode of London's Burning (a fireman drama show) was shot in the old fire station in Civic Square; and a scene from an episode of James Nesbitt's Murphy's Law was filmed at Tilbury Docks' Cruise Terminal.

Notable people who have had some connection with Tilbury include: two football players, John Evans (1929–2004), who played for Liverpool, and Tom Scannell (1925–1994); Noel Betowski, artist, who was born there in 1952; and Thomas Horrocks Openshaw (1856–1929), who was a consultant surgeon at Tilbury Hospital. Tilbury was home to one of the UK's most notorious gangs of skinheads, the Tilbury Trojan Skins, who were featured the headlines in a Sun newspaper article entitled Aggro Britain. The skinheads were also featured in the 1982 film Pink Floyd—The Wall.

Tilbury is featured in the award-winning 2009 film Fish Tank, with the star, Katie Jarvis, having been recruited after a scout saw her arguing with her boyfriend at Tilbury Town railway station.

Some of the scenes from the 2007 TV film of Oliver Twist were filmed at Tilbury Fort.

In the 2014 BBC series The Honorable Woman, the title character Nessa Stein is made Baroness of Tilbury in the first episode.

Tilbury has a Non-League football club Tilbury F.C. who play at Chadfields.

All content from Kiddle encyclopedia articles (including the article images and facts) can be freely used under Attribution-ShareAlike license, unless stated otherwise. Cite this article:
Tilbury Facts for Kids. Kiddle Encyclopedia.