Tim Tam is a brand of chocolate biscuit made by the Australian biscuit company Arnott's. It consists of two malted biscuits separated by a light chocolate cream filling and coated in a thin layer of textured chocolate.

The biscuit was created by Ian Norris, who was the director of food technology at Arnott's. During 1958, he took a world trip looking for inspiration for new products. While in Britain, he found the Penguin biscuit and decided to "make a better one".

Tim Tam went on to the market in 1964. They were named by Ross Arnott, who attended the 1958 Kentucky Derby and decided that the name of the winning horse, Tim Tam, was perfect for a planned new line of biscuits.

In 2003, Arnott's sued Dick Smith Foods over their Temptin' brand of chocolate biscuits, which Arnott's alleged had diluted their trademark as a similar biscuit, in similarly-designed packaging. The case was settled out of court.

Pepperidge Farm, a sister company of Arnott's, began importing the Tim Tam to the United States of America in 2008. The Tim Tams are still "Made in Australia" and packaging in the United States bears the slogan "Australia's Favorite Biscuits." In 2017, an additional flavour, dark chocolate-mint, was produced for and introduced only in the American market. 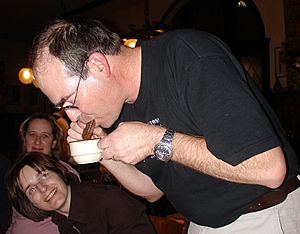 The Tim Tam Slam (also known as the Tim Tam Shotgun, Tim Tam Bomb, Tim Tam Explosion and Tim Tam Suck) is the practice of drinking a hot or cold beverage through a Tim Tam. Opposite corners of the Tim Tam are bitten off, one end is submerged in the beverage, and the beverage is sucked through the biscuit - as though the Tim Tam itself were a straw. The crisp interior biscuit is eventually softened and the outer chocolate coating begins to melt, at which point the biscuit is eaten. The Tim Tam Slam can also be performed with cold (usually milk-based) beverages.

The Arnott's company used the name Tim Tam Suck in a 2002 advertising campaign. 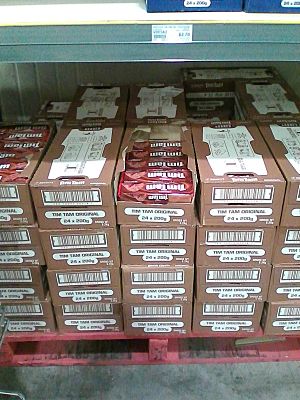 The original Arnott's bakery, opened in 1865, was located in Newcastle, New South Wales. To date, manufacture of Tim Tams and other Arnott's products has remained largely within Australia, including bakeries in Sydney, Adelaide, and Brisbane. In 2009, Arnott's invested 37 million Australian dollars in a state-of-the-art production line at its Brisbane facility, expecting to boost productivity and increase jobs.

At the Huntingwood bakery in Western Sydney, the production line turns out about 3,000 Tim Tams per minute and uses 20 tons of the biscuit's cream filling and 27 tons of chocolate coating each work day. Biscuit dough, containing sugar, flour, colours and flavours, is mixed for 20 minutes. Biscuits are then cut to 1mm thick, 11 holes are punched per biscuit and they are baked in gas ovens for 90 minutes. Freezing air cools the biscuits before they are flipped and filled with cream, dunked in chocolate and cooled again. 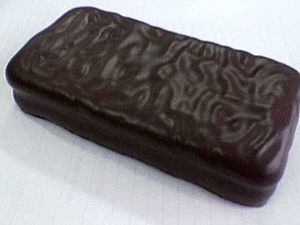 In 2004, Arnott's caused a controversy when they released limited edition Tim Tam Tia Maria and Kahlua Mint Slice varieties, flavoured with the popular alcoholic liqueurs. The Australian Drug Foundation suggested selling the biscuits in supermarkets was "potentially dangerous" by "normalising" the taste of alcohol for children. An Arnott's spokesperson observed that a customer "would need to consume your body weight of biscuits every hour to reach a blood-alcohol content of .05". 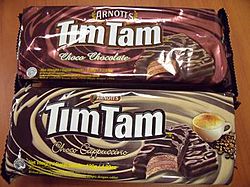 Tim Tam chocolate sandwich biscuits are manufactured in Indonesia by Halo Arnotts. A cheese flavour of Tim Tams has also been developed for the Indonesian market.

Arnott's introduced toffee apple and pineapple flavours to the market in June 2016. In October 2016 they added a mango variety to the range, and in February 2017 they launched four new flavours—choc mint, salted caramel & vanilla, coconut & lychee and black forest—in partnership with Gelato Messina.

All content from Kiddle encyclopedia articles (including the article images and facts) can be freely used under Attribution-ShareAlike license, unless stated otherwise. Cite this article:
Tim Tam Facts for Kids. Kiddle Encyclopedia.