The Town of Timnath is a Statutory Town located in Larimer County, Colorado, United States. Founded in 1882, Timnath is a small agricultural/farming community located southeast of Fort Collins, Colorado, approximately one-half mile east of the Harmony Road/Interstate 25 interchange, on a small bluff east of the Cache la Poudre River. The surrounding farmlands have been used primarily for potatoes, alfalfa, sugar beets, and cattle. Although the town has remained virtually unchanged in recent decades, the encroaching growth of both Fort Collins to the west and Windsor to the south have placed the town in an area considered favorable to development. The population was 625 at the 2010 census.

Other structures lining Main Street (a section of County Road 5) include an elementary school (in the Poudre School District), a one-story modern post-office, and several other historic buildings. Most residences are single-family homes. 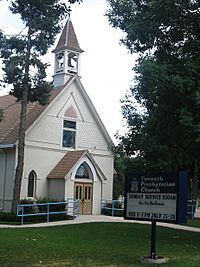 The area was first homesteaded by white settlers in 1869. The first schoolhouse was constructed that year, approximately one-half mile west of the current town, and was named "Fairview". By 1880, the community had outgrown the schoolhouse, and new "Fairview" school was built just north of the current town. The school also served as an early meeting place for the Presbyterian Church. The turning point in the early history of the community was in 1882, with the arrival of the Greeley, Salt Lake and Pacific Railroad (controlled by the Union Pacific) linking Greeley and Fort Collins. The following year, the Presbyterian Church, petitioned by local residents, sent a missionary to found a congregation. The current structure along Main Street dates from that year.

A post office was established in 1884, headed by Reverend Charles A. Taylor, the local Presbyterian minister. When the post office was formed, Taylor bestowed the current name of the town from the 14th chapter of the Book of Judges, as the place where Samson went to obtain a Philistine wife. In 1900 the second school became outdated and a new one was built, dropping the name "Fairview" permanently. This structure currently stands as an out-building to the current elementary school. A larger school was built in 1918 (which burned in 1935 and was rebuilt the following year). The school district was consolidated with that of Fort Collins in 1960.

During World War II, the Empire of Japan experimented with fire balloons carrying bombs that floated across the Pacific to the U.S. One of these bombs dropped and exploded in a field in Timnath.

As of 2013, the incorporated area of Timnath comprises 5.05 square miles of land.

The historical downtown lies along County Road Five, which runs north-south parallel to Interstate 25 half a mile to the east. Since the 2000 census, the town of Timnath has annexed several square miles of land to the east and southeast; the town has experienced significant commercial development along the east-west corridor of County Road 38 (Harmony Road), including Wal-Mart and Costco. The majority of the six mile (north-south) by three mile (east-west) block of land that lies within Timnath's growth management area is low-density residential or agricultural, and is designated to remain so, with open space and parkland filling the remainder of the area, particularly near the Poudre River and Timnath Reservoir.

There were 214 households out of which 46.7% had children under the age of 18 living with them, 72.0% were married couples living together, 7.9% had a female householder with no husband present, 3.7% had a male householder with no wife present, and 16.4% were non-families. 14.0% of all households were made up of individuals and 1.4% had someone living alone who was 65 years of age or older. The average household size was 2.92 and the average family size was 3.23.

All content from Kiddle encyclopedia articles (including the article images and facts) can be freely used under Attribution-ShareAlike license, unless stated otherwise. Cite this article:
Timnath, Colorado Facts for Kids. Kiddle Encyclopedia.