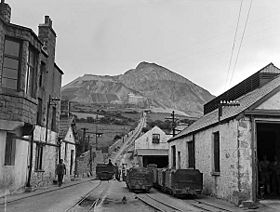 Trefor is a village on the north coast of the Llŷn Peninsula in Gwynedd, Wales. With nearby Llanaelhaearn it makes up Llanaelhaearn community, which has a combined population of 1,117. Trefor is the larger of the two settlements, with a population of 814 as of 2011 census. It is in the historic county of Caernarfonshire. 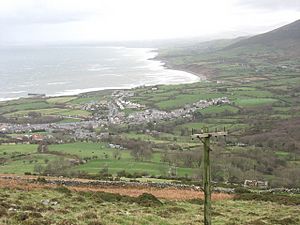 Pentref Trefor. The village of Trefor.

Trefor is 9 miles (14 km) north of Pwllheli and 13 miles (21 km) south-west of Caernarfon. It is surrounded by the sea and mountains, overlooking Caernarfon Bay. 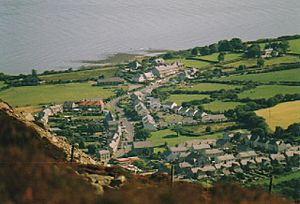 Located just off the main A499 road, Trefor has a small harbour and a beach with some sand. At the top of the beach is an emergency telephone to summon help in the event of a maritime emergency. The land behind the beach is made of boulder clay deposited during the last glaciation, and is being slowly eroded by the sea.

Rising steeply behind the village is Yr Eifl and its neighbouring hills. A granite quarry, Trefor Granite Quarry or the Yr Eifl Quarry, opened there in 1850. The industrial narrow gauge railway—Trefor Quarry railway—opened in 1865 and brought rock from the quarry to the coast, but was gradually replaced by road transport and was finally closed in 1960. Trefor granite is used to make curling stones. There is one school in Trefor, a primary school called Ysgol yr Eifl.

Yr Eifl is a range of three hills that dominate the skyline above Trefor. Tre'r Ceiri, the second highest of the hills, has on it one of the best examples of a Stone Age or Neolithic settlement in Europe on its summit. Views from the summits, on a clear day, extend to Ireland, the whole of Cardigan Bay, Anglesey, Snowdonia, and the northern mountains of England. The central peak, the tallest at 561 metres (1,841 ft), is called Garn Ganol; the most seaward, and smallest peak, is Garn For, home to the quarry.

There are two retail outlets in Trefor: a village shop which opens between 7.00 am and 7.00 pm Monday to Friday with shorter hours at the weekend, and a post office. To the north end of the village is a children's play area. It is possible to go on a pushchair-friendly circular walk, starting at the play area, down to the beach, across the headland and back into the village again.

Visitors can surf the other side of the harbour wall at Trefor. It can be a nice left-hand point over a stony reef thrown off the headland. There is a small pier next to the harbour; it has been deemed unsafe so is currently closed to the public.

Since 2015 a cycle club has been established in the village and surrounding area called Clwb Beicio'r Eifl. Its members regularly take part in sportives and club rides.

All content from Kiddle encyclopedia articles (including the article images and facts) can be freely used under Attribution-ShareAlike license, unless stated otherwise. Cite this article:
Trefor Facts for Kids. Kiddle Encyclopedia.